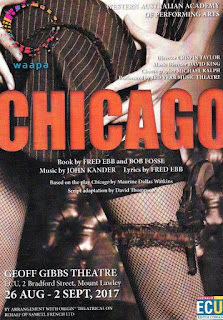 By scheduling a bona fide musical blockbuster in the last slot of 2017, WAAPA has eschewed the choice of lesser known productions over the last few years (The Beautiful Game, Carrie, Merrily We Roll Along). The results are surprisingly uneven.

Make no mistake, the songs and score are first rate and I was heartened to see a 15 piece orchestra under the baton of David King that played well. Special mention to the trumpet players Jack Sirett and either Matthew Smith or Benn Hodgkin.

The characterisation and staging though were very vaudevillian. This is not a slinky, sexy production by any means, more a heightened satirical romp that left me oddly disconnected from the material.

The opening number All That Jazz was strangely lifeless and Cell Block Tango suffered mightily with the over-exaggerated portrayal of the Merry Mistresses of Murderess' Row.

The show did settle into a strong sequence of scenes/numbers from A Little Bit of Good to We Both Reached For The Gun to Roxie and the second half was much more convincing particularly with the trial sequence.

Director Crispin Taylor and guest Choreographer Michael Ralph made Jenna Curran work her backside off as Velma Kelly in a physically demanding performance. Kelsi Boyden, an always expressive performer, impressed as Roxie and Laura Jackson also caught the eye as Mama Morton. I didn't quite get the pathos of Amos from Finn Alexander though, again, he was mainly played for laughs.

David Cuny was suitably slick as Billy Flynn but the choice of a boxing themed introduction to the character jarred. Tom Gustard stole the show with the Mary Sunshine number A Little Bit of Good. Nick Errol makes the most of his cameo as Fred Casely in great style.

A colourful confectionery that had its moments but needed a more hard-boiled edge to truly convince.

*originally published at facebook.com/perththeatrereviews
Posted by Richard Hyde at 23:33