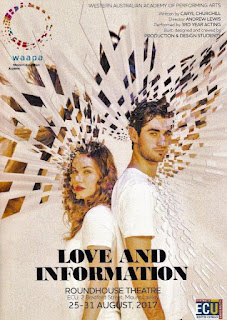 The first time I saw a production of this play - a series of rapid fire vignettes over 90 minutes - I described it as a Showcase on Speed. That was last year with a new collection of performers at Curtin University. This time it is with the graduating class at WAAPA. My opinion has not changed.

The difference, however, is that I have seen this troupe of actors for the better part of two years over a half dozen or so productions.

The play itself keeps me at arm's length - I have no empathy or connection with any of the dozen upon dozens of characters as there is no narrative, no arcs, no backstory, no connective tissue, only a fleeting glimpse at a series of circumstances, the context of which is illuminated on the set. From that standpoint it is purely an intellectual exercise with the (tenuous) link between all these moments being thematic in nature.

What is interesting though is that my empathy and emotional connection is with the actors themselves. They are given a myriad of different roles and scenarios to play, some seconds long, some a decent length scene. It demands a range of emotions and is a nice acting challenge. To see these students now on the cusp of professional careers rise to that challenge is the true pleasure of this play. In effect it IS a precursor to the end of year Showcases that will catapult them into the next stage of their acting journeys.

The other hook is in the execution. Associate Professor Andrew Lewis directs this with the same multi-layered approach as he attacked 2015's Macbeth. There are two musicians perched in each upper corner of The Roundhouse adding live music, recorded tracks, and aural effects; there are projections of scene titles and images on the set; and that set itself is a clever two level construction with compartments and scrim covered openings that allow for all types of creative configurations buttressed by the lighting design. Lewis is also very good at using the whole thrust stage space at the venue.

It all comes to what feels like an arbitrary stop as the play is unconnected to normal structures and story-telling rhythms. However, it was satisfying to see this group together all smiles at the conclusion. The two standouts in the Saturday matinee for mine were Audrey Blyde and Sasha Simon. Many a fine singing voice was also on display which bodes well for The Threepenny Opera in October.

*originally published at facebook.com/perththeatrereviews
Posted by Misadventures in WA Film at 22:57