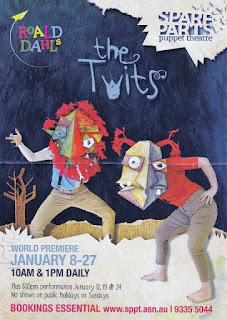 I have a confession to make.

Yes, that’s right, I have, gasp, a beard. And in the world of Roald Dahl, on whose book the play is adapted, that would seem to be an impeachable offence.

It used to turn ginger (thanks Dad!), now it goes grey (thanks aging!). Sigh. To my knowledge, however, I have never discovered condiments, the leftovers from last night’s Chinese, or fish heads ensnared in it… though there was that one time when I… ahem… let’s move onto the show…

And the lovely couple, The Twits.

Mister Twit is also cursed with facial hair, clearly a sign of sinister character and intent. Mrs Twit is simply ugly. Nasty thoughts will do that to a person. Together they are an odious pairing who like nothing more than playing pranks on each other… and eating bird pie. The key ingredient of bird pie is, of course, freshly caught birds, trapped on the branches of the tree in the Twits’ backyard that have been liberally daubed in glue.

This causes much distress to Muggle-Wump, a monkey also trapped, in this instance, by the cage Mister Twit keeps him in. Muggle-Wump tries to warn the birds but not being fluent in any avian dialects his pleas fall on deaf little bird ears. Until the arrival of the Roly-Poly Bird from far-flung climes who acts like a universal translator saving the birds from future baking disasters.

Enraged, The Twits escalate matters by bringing a gun to a pie fight only to find their comeuppance at the hands (and, I guess, talons) of Muggle-Wump and the Roly-Poly Bird.

In many ways it is a dark tale, however, the ingenious manner by which The Twits are defeated is both satisfying and a positive message to stand up for yourself against the nasty people of the world (and beard wearers obviously). There were many children in attendance and they were rapt with the antics of The Twits.

In this they are well served by the impressive physical performances of Geordie Crawley (Mister Twit and the Roly-Poly Bird) and Jessica Harlond-Kenny (Mrs Twit and Muggle-Wump) who throw themselves around the stage. Exaggerated movement and facial expressions, silly accents and songs, and the use of all kinds of sound effects make for a robust piece of theatre. This is enhanced by the colourful masks, puppets, clever props and set design that bring the world of The Twits to life. There is also a bold lighting design to complement all these elements.

The tree is a clump of different lengths of plastic pipes and conduits from which the various props and accessories hang. The masks for the couple are amusingly distorted – Mister Twit with beard full of food; Mrs Twit with her glass eye that has a mind of its own. All the other characters are given distinctive looks and traits making this a real tour de force for the two actors. They’ll earn their keep during the season in January as temperatures rise.

The story itself is simply constructed. The first sequence is all about how The Twits try to outdo each other with their pranks. This establishes the off-beat tone, outlandish characters, and sets up elements for the couple’s downfall. The story then switches perspective to Muggle-Wump and the Roly-Poly Bird who work together to save the birds then plot to enact the ultimate prank on The Twits. The tale is fast-paced and engaging, and at around an hour in length, keeps the attention of the children. But there’s plenty for the adults to enjoy as well with some sly one-liners that harken to contemporary events and issues.

This is an enjoyable production that children and adults alike will love. Full of colour and movement; humour and a positive message, it will be a summer hit for Spare Parts Puppet Theatre. As we discovered after the show it also presages the beginning of a gloriously ambitious 2018 season for the theatre company.

The Twits is directed by Michael Barlow, co-created by Humphrey Bower and Barlow based on the Roald Dahl book of the same name, and stars Geordie Crawley and Jessica Harlond-Kenny. The designer/puppet maker is Leon Handroff with Lighting design by Rhiannon Petersen. The Twits runs from 8-27 January at 1 Short Street Fremantle.

Take your children, grandchildren, nephews and nieces, the neighbour’s kids… they’ll have a blast.
Posted by Richard Hyde at 21:34