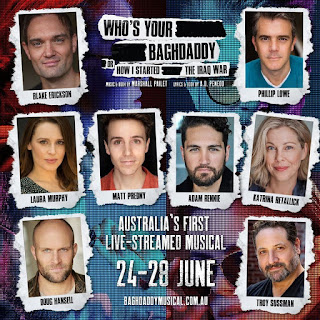 There are few events in history that you can definitively point to and say, “that changed the entire world forever.” There have been two such events in the last twenty years. We’re living through one right now as a global pandemic has forced us all to rethink how we live, work and interact with each other. The other occurred on 11 September 2001. One of the many ramifications of that terrorist attack was the manufactured war with Iraq as a wounded America sought vengeance. A war built on a foundation of lies.


Fascinating then that this show deals with both earth-shattering occurrences; in content and how that content is delivered in a socially distanced world where the arts have been decimated by Covid-19 restrictions and government malice.

Three months ago, I’d never heard of the video application Zoom. It’s now ubiquitous. As theatres around the world have been shuttered, performers and production companies have switched to online applications to share concerts or open the vaults to previously filmed material. Who’s Your Baghdaddy, however, is billed as Australia’s first live-streamed musical.

There were a few glitches. The first entirely of my own making. I had the 7.30pm start time pencilled in… but, of course, it was Eastern Standard Time not WST and this poor Western Australia joined way late. Hey, I’m out of practice. Then I had the screen freeze for what seemed like an eternity. The only remedy was to refresh which meant I missed another chunk. After which it was quickly Intermission. I had intended to write a proper review, my first in quite some time, but given I’d missed a lot of the first half I’ll give my impressions only instead…

A considerable amount of thought, preparation, and technical expertise has gone into all aspects of this production. Staged in various rooms at the one location, each performer had their own space which was beautifully lit (Phoebe Pilcher) and dressed (Isabel Hudson) appropriate to their character. The ‘interaction’ between them was well choreographed (Leah Howard) and directed (Neil Gooding) as the main viewing screen was populated with character boxes in varying configurations. The sound design (David Bergman) was crisp for dialogue, music and vocals (MD Steven Kreamer). It was an impressive feat of coordination with all departments working seamlessly to present a professional show. I suspect Technical Director Michael Goodyear had his work cut out and should be rightfully lauded for pulling it off with aplomb. 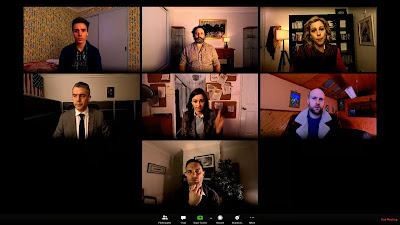 The cast was uniformly excellent and worked well together. I can only imagine the time and effort it must have taken to have not only the vocals in perfect synchronisation but the blocking as well. I was particularly impressed with Matt Predny (Rickart Becker), Laura Murphy (Berry Stanton), and Katrina Retallick while Phillip Lowe’s portrayal of ‘company man’ Tyler Nelson dominated the early going of the second half.

This is where the Book takes a turn away from what appeared to be a satirical first half to a more serious tone. The notorious Iraqi defector Curveball played by Troy Sussman largely disappears until the end of the show where Sussman delivers the most memorable and moving song, Speak To Me Tomorrow. This also means his handler, played by Predny, is absent for much of backend of the production as the focus switches to the people who could have spoken up but, for various reasons, did not. Colin Powell’s shameful presentation at the UN is a low point of deception and wilful disinformation. Some of it based on false intelligence provided by Curveball. Many maintain to this day that Powell knew that this and other fabrications were completely bogus. Bush and his Neocons got the war they were spoiling for. 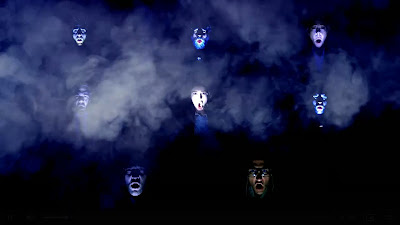 While what I saw of the satire perhaps wasn’t as biting as it could have been, nor the drama as damning, overall this is a slick production that admirably fills the present void of live content. It points the way to what is achievable using technological solutions when more traditional methods are not an option or constrained. It will be interesting to see if it is a passing phase as restrictions ease or whether it becomes a viable delivery mechanism for production companies. Regardless, Who's Your Baghdaddy is a bold and ambitious show tackling a still controversial subject.