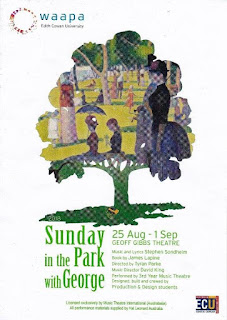 If the goal of a theatrical work is to make an audience feel something, whether that be through laughter, tears, outrage, self-reflection, inquisitiveness, discovery or simply awe, then it's been a successful 2018.

It's perhaps no coincidence that three of the top ten productions in this category are Stephen Sondheim musicals. Oftentimes you can experience all of the above in the one production from this bonafide master.

This year, however, the top musical moved me to tears in a sublime exploration of what it means to create art. To be affected so profoundly by a piece of theatre is a boon beyond measure.

My top ten musicals, cabaret and concerts of the year:

1. Sunday in the Park With George - WAAPA

Yes, I cried. Both nights I went. Children and Art and Move On had tears rolling down my cheeks. Did I like the opening sequence in the second half? Not overly. But the first half is sublime as is the modern day return to the Island of La Grand Jatte. Every aspect of the production was exceptional - set & art design, costuming, lighting and sound, the orchestra - plus two wonderful lead performances.

"There was a buzz around two years ago that The Drowsy Chaperone was the best production in years at the Geoff Gibbs Theatre. Yes, it was that good. I'm here to tell you Sunday in the Park with George is right up there with it. Maybe even better and that's a debate I'm happy to have. This was an exceptional production of what is a masterwork by Stephen Sondheim and James Lapine."

Not all fairy tales have a happy ending in the hands of Sondheim & James Lapine and the tonal shift after interval is jarring. But the storytelling is inventive and it's an extraordinary collection of songs. The young cast and orchestra tackled it with real verve in a most entertaining production.

"The show was led by three central performances that were very good indeed - Aleisha Archer as a feisty Little Red Riding Hood; Imogen Rabbitte, full of compassion as the Baker's Wife; and Cat Perez soars vocally and in scene chewing intensity as the Witch."

What a way to end the year! A rollicking couple of hours in the hands of a brilliant jazz band and three lead vocalists each with their own distinctive style and personality. It all gelled into an irresistible foot tapping evening Downstairs at the Maj.

"The music is timeless – the slide of the trombone; the slap of the bass; fingers tinkling the ivories; the wail of a trumpet; the caress of a saxophone; the crispness of a snare. Together, sublime. Music to make you smile, to tap your toes, to sway in time to the beat. Then you add the voices. Playful and sexy, crooning, snarrrrrrrrling, soaring. Music and vocals working in harmony."

A farewell concert at the Ellington for a performer who made her mark in only a few short years in the independent theatre scene. An eclectic mix of songs from “Tin-Pan Alley, classic Broadway, West End blockbusters and European cabaret, concept albums, pop/folk crossovers, and contemporary Australian musicals with guest performer Megan Kozak adding her trademark vocal fireworks.

"There is no doubt Perth is losing a unique talent. But there was a sense that Taryn has outgrown us and that bigger and better things await as she chases her dreams on the other side of the world. On the evidence of her body of work to date and this memorable performance London will be gifted with an accomplished performer who will flourish in the spotlight."

I have only recently been going to the concerts held by the percussion students who go under the moniker Defying Gravity. They are such joyous affairs with music from around the world performed on all sorts of instruments you might not normally hear. There is a real camaraderie between the students and with the guest performers, many who are successful alumni.

You're guaranteed to laugh your arse off at any of the musical comedies created by Messrs. Jones and Woods. Put together excerpts from all of those shows and you'll be reaching for an oxygen mask such is the sheer inventiveness of their humour and execution.

"Their roster of productions has won multiple awards, toured nationally and internationally, and are among the best works created in this state in any performance medium in the last decade. My personal favourite, Point & Shoot is a spectacularly good work. But then all their shows are gems."

The production started a little slowly and was perhaps lost in the cavernous Heath Ledger Theatre. But when you have a roster of talented vocalists and such an audacious concept for a musical then it's not long before it wins you over. Features one of my favourite moments when The Balladeer turns into something far more sinister.

"Darkly humorous and inventive it's a cracking show. The Black Swan veterans were in fine form but the delight for me was seeing so many recent WAAPA graduates - Finn, Nick, Mackenzie, Natasha, Cameron, and Nathan up there on the Heath Ledger stage and doing so well in a high quality piece of theatre."

For people who like their festive season a little bawdy this was a sleek, laugh out loud funny, and inspired cabaret show poking fun at all sorts of social woes magnified under the pressure cooker of the family Christmas.

"The original songs are clever and pointed in their observations but never shy away from some dark home truths while being hilariously delivered by Newman and Thomsett. And what a combination they are – Thomsett plays Bonnie as a character with a perky disposition whilst seemingly craving acceptance from her brother; while Newman is all faux outrage and confidence as Bailey."

9. From Marathon to Waterloo, In Order Categorical - WAAPA

I can't claim to be a Gilbert & Sullivan aficionado so this snuck up on me as an absolute treat. Performed on a gloriously presented set by the beautifully costumed and lit classical voice students, this production put a smile on my face from start to finish.

"Staged on a sumptuous set with accompaniment on piano by musical director Marilyn Phillips, the gorgeously costumed students sparkled. There was wit and joy aplenty and those glorious voices soared especially when the massed company was deployed."

[You might know that I detest lists that have ties as being lazy. There were genuinely four productions in consideration for the final spot on this list and the easiest thing in the world would be to name them all. However, I like to torture myself by making a decision. So, after much consideration and agonised hand wringing...]

Powered by an eminently likeable performance from Matthew Arnold as Drew with notable support from Timothy How as Lonny this was a raw and raucous production. The tribute to 80's power ballads and rock standards was all good cigarette-lighters-waved-in-the-air fun.

Such an assured performance as Dot in Sunday in the Park With George. Daniel sang beautifully and handled the dense lyrics faultlessly. But it was the depth of her acting that elevated this to something truly special. From embracing the inherent joie de vivre of the character to the disappointment of knowing Dot will always be second to her lover's obsession. Then the transformation to the much older Marie in the second half before the emotional triumph of Dot's return at the end. Extraordinary.

Handled the demanding role of Georges Seurat and his grandson George with an aplomb that belied his age. Worked incredibly well with Daniel to establish the emotional core of their relationship and the main thrust of the piece in the first half. Switched gears to play the modern day grandson who returns to the site of the famous painting to encounter Dot in a moving final sequence. Sang well including the famous Finishing The Hat and does a mean dog impersonation to boot!

Added real flair portraying Charles Guiteau in Assassins with his The Ballad of Guiteau being a standout moment as he milked the walk up the stairs to the gallows with outstanding comic exaggeration.

Won me over with an utterly infectious, high energy performance as Elle Woods in Legally Blonde. O'Connor was beautifully costumed, so totally likeable in the role, danced and sang with winning charm.

Conveyed such a relaxed stage presence as his Balladeer commented on events before undertaking the startling transformation into Lee Harvey Oswald in Assassins. Alexander also showcased a wonderful voice that stood out in a cluster of excellent vocalists.

Seemingly everywhere in his final year at WAAPA - composer, percussionist, dancer - he added to his Defying Gravity performances with contributions to The Crucible (composer), Ajax in Afghanistan (musical director) and percussionist for In The Heights. A charismatic performer and inventive composer you sense he is on the cusp of being a superstar in the world of percussion.

Perez had an excellent end to the year featuring as The Witch in Into the Woods where she displayed powerhouse vocals and a knack for stealing every scene she was in. Backed up with a harrowing portrayal in an original play staged at Murdoch's Studio 411.

I couldn't leave Gordon off any list of notable performances for the year. She was in fine form on her return from Spain with a characteristically mesmerising outing in Moonshinin'. An outstanding vocalist with well honed stagecraft, Gordon brings the glamour and sexiness mixed with an aura of mischievousness that is an irresistible combination.
Posted by Richard Hyde at 17:34