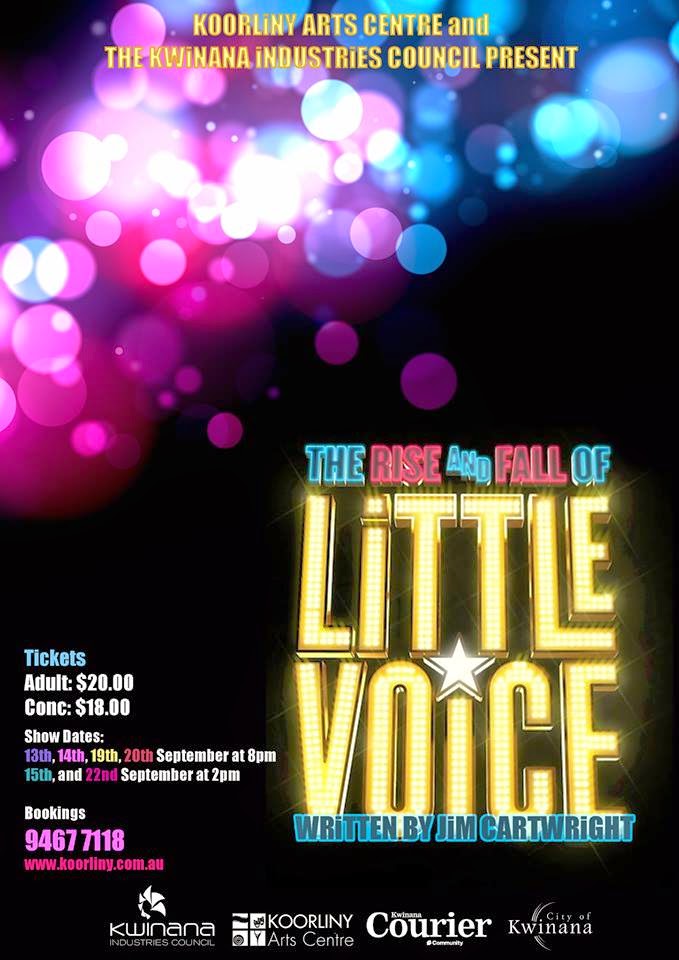 I made my way to Kwinana for a fast-becoming-regular jaunt down the freeway to the Koorliny Arts Centre, this time to see The Rise and Fall of Little Voice. I find this a most interesting and difficult story in both the incarnations I’ve now seen (play and film). It is an ugly duckling story populated by people who are essentially ugly. That makes it, for me, a challenging watch. The trick then is to unravel my reaction to the characters versus the performance of the actors.

The story is simple enough – the eponymous Little Voice or LV as she is known, fanatically listens to old records in her room and has become an expert impersonator of their vocal styles from Shirley Bassey to Marilyn Monroe and a whole variety in between. Her mother, who is dating a small time talent agent, sees her daughter as a way to a better life; the agent sees LV as a way into the spotlight and the dollars she will bring. They coerce her to perform at Mister Boo’s club. Meanwhile, quietly spoken telephone technician Billy innocently courts LV.

First off, the mother is thoroughly unlikeable and, in many ways, despicable. Full credit then to Judi Johnson who plays such a difficult character with full on gusto. Yes, I was squirming as I find the character’s motivations and actions largely abhorrent but that’s the way Mari Hoff is written. Anything but a total commitment to the character would fall flat. It’s uncomfortable at times but I can’t fault the commitment.

The agent is also problematic. More sleazy than charismatic, his put down of Mari in the latter stages of the play is simply nasty and mean spirited. The lady sitting next to me visibly blanched as he launched that horrid verbal assault. Again, credit to Ian Butcher for tackling another unsavoury character, that of Ray Say.

Hillary Readings provides gentle comic relief as Sadie Mae but even her character is mainly there to reflect the ugly side of Mari.

The structure is also problematic as the first act largely comprises the antics of Mari and Ray with LV very much in the background. We get glimpses of her talent and of the gentle romance that is to unfold but essentially we are immersed in Mari’s tawdry little world.

Then we get to the second act and this is where the play cranks into gear because it finally unleashes the star that is both the character of LV and Breeahn Jones who plays her. This story only works if you believe LV has the amazing talent to sing these standards AS the original performers. Jones shines when given full voice, pun fully intentional. I had not seen her perform before but the programme notes indicate she won 2011’s Best Actress in a Musical at the Finley Awards and she definitely has an excellent and versatile singing voice.

Geoffrey Leeder as Mister Boo moves things along nicely and the club is represented simply as a microphone in front of closed stage curtains with a lighting cue saying Mister Boo’s. This meant Jones was less than two metres away from where I was sitting in the front row and to see her go from reserved, put upon daughter to animated performer was a delight.

Then there is Jack McKenzie as Billy who, in a relatively small but pivotal role, adds genuine sweetness and charm. This is a critical counterpoint to all the crassness that surrounds LV’s world and he pulls it off well.

The set was very good with a split level representing the house – lounge room and kitchen downstairs; LV’s bedroom upstairs. The transitions though felt a bit clunky at times with the opening and closing of the stage curtains by hand when going to the club or outside the house.

Overall I enjoyed this but it is a story with many characters that are hard to warm to. Even LV’s eventual castigation of her mother, while earned, verges on being mean spirited itself. The singing, however, is excellent and the underlying love story paid off nicely.

Directed by Ian Cross.
Posted by Richard Hyde at 15:35