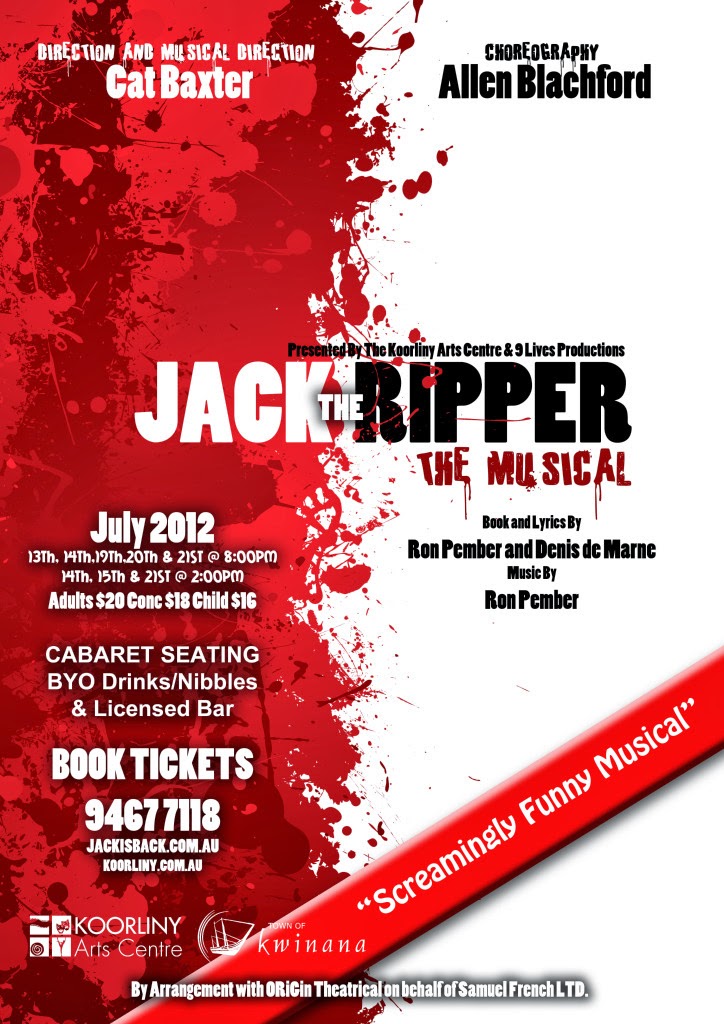 It’s 1888 and prostitutes are being murdered by the notorious Jack the Ripper. The girls have to work to survive even though Whitechapel ain’t the saf'st place 'round no more. The men, good honest dockhands, are broke, waiting for a boat to come in while the police are confounded as the body count rises.

Fertile ground for a musical? This is, in fact, more rollicking music hall style with a healthy dash of vaudeville thrown in and it works an absolute treat. The piece itself acknowledges this with characters congregating in a music hall for regular set-pieces where everything from the Queen to all manner of authority figures are mocked.

Queen Victoria (Kate O’Sullivan) may indeed rule the realm, but the Queen Bee amongst the working girls is Marie Kelly (a luminous Victoria Luxton) who is the centre of attention for admiring customers and those who seek to ‘save’ her alike. She is flirty, feisty, tough and Luxton plays her with great confidence and has the standout singing voice with several featured songs. Marie’s main foil is Montague Druitt (Jack McKenzie) who seeks her out with Bible and seemingly good intentions in hand.

The story is actually quite thin but this didn’t trouble me as it explores the colourful world of Victorian London and the characters that populate it. The bawdy fun takes on darker tones as one after the other the working girls fall (unseen) to the Ripper’s blade. Indeed, Jack is a bit of a McGuffin for the majority of the piece until things are tied up late in the second act.

There are excellent songs delivered in rousing style by the full company in many instances; as well as some lovely quiet moments, especially “Good-bye Day” as ‘Marie and the girls’ mourn the death of Polly (Tarryn Bullock) and ‘Step Across The River’ as Marie and Lizzie (Kate O’Sullivan again) have a touching duet as Marie tries to leave her working girl life behind.

‘Rippers Going To Get You’ that closes the First Act was also a highlight as the lads warn Annie (Georgia McGivern) about the dangers of being alone at night; the ‘Policeman’s Chorus’ is hilarious vaudeville by ‘The Constables’ (in unexpected attire); and there is a fabulous set-piece skit where a plan is hatched to write a letter to dob in a troublesome character as the killer.

This is a big cast (20 listed in the programme and I apologise for not naming them all here) and the venue was beautifully set up with cabaret seating and a spacious stage with excellent set design. The costuming was as colourful as the characters and the singing was of a generally high standard.

I found this a thoroughly entertaining romp of a musical delivered with great humour and verve. For only $20 a ticket it is an absolute steal given the quality on show. So I would strongly recommend you get down to the Koorliny Arts Centre in Kwinana and enter the world of Jack, Marie and the denizens of Whitechapel while you still can.