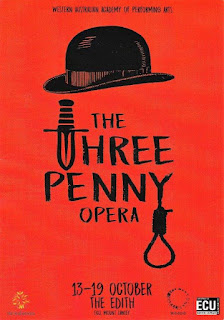 Attitude. The very best productions have it. Clearly discernible, unapologetic, and totally embraced by all involved. The third year acting students bring it in spades with what turns out to be a perfect ending to their formal training at WAAPA. There is a cockiness and surety here that is undeniable.

Initially I had thought the prototypical musical was an odd choice for the acting cohort given the vocal demands but it turns out be an inspired one. It suits the group personality of this graduating class like a 'fancy glove'. As one audience member put it after the show, "they owned the space".

And what a glorious space it is.

This is why you make the Edith Spiegeltent a permanent addition to the performance venues on the ECU Mount Lawley campus. For productions exactly like this. The atmosphere and sense of history adds immeasurably to the aura of a classic piece of theatre. So much so that visiting director Craig Ilott dispenses with the need for set decoration with the exception of, as Roy Joseph's messenger amusingly put it, "these fucking mannequins". The two of which were totally extraneous to proceedings anyway.

Instead, the 8 piece band, conducted by visiting graduate Kohan van Sambeeck, is nestled at the rear of the tent with a thrust-like stage jutting into the centre of the space. In a smart move, the audience is situated within the inner circle of the spiegeltent so there are no cluttered sight lines. We're right on top of the action. Or, as I discovered, the action is occasionally right on top of us!

The outer circle and booths were the province of our players. This gives the production an immersive quality for the audience as characters prowl and cavort around us with multiple entry and egress points to and from the stage. There is the feeling of a fully formed world that exists beyond the strictures of the performance space. A colourful, bawdy, exotic world full of villains and dames; vagabonds and, well, to put it indelicately, ladies of dubious reputation. But something more as well - as if we're transported in time to how The Threepenny Opera might have been experienced in decades gone by.

In a simple device the setting of scenes was left to characters wielding cardboard signs (and to our imaginations). I must say the furniture was ever so fancy in the stables of my mind's eye! But more than that, a sense of time and place was evoked by make-up and costuming. The use of white face paint for all; the women provocatively attired; the men all singlets with smart pants and braces; not to mention a range of beggar chic that would make Oliver Twist blush.

Most impressive of all the performers were, as another audience member put it, "balls to the wall" in their characterisations. This was a chance to 'go big' and they lapped it up. In another smart move actors were mingling with the audience before the show started; being cheeky, friendly, inviting. It set the tone - that attitude - of the production right from the get go. A relaxed confidence that you couldn't help but feel and respond to. Thank you Laura McDonald, Sasha Simon, and Katherine Pearson for the chats.

To top that all off there were many fine singing voices with Natasha Vickery (Polly Peachum), Skye Beker (Lucy Brown) and Katherine Pearson (Jenny Diver) excelling in this regard with notable contributions from Rhianna McCourt who belted out Ballad of Sexual Dependency with savage contempt and, of course, the notorious Macheath, Jake Fryer-Hornsby, who acquitted himself well with the challenging lead vocal role.

This is generally described as a 'play with music' so there is ample opportunity to show off the acting chops. With such a rogue's gallery of characters to inhabit this provided all sorts of treats. Kudos to Macheath's henchmen - Charles Alexander, Kingsley O'Connor, Elliott Giarola and Mitchell Bourke - who provided a touch of menace, more than a dash of comic relief, and worked together well especially during the stables sequence.

McCourt and the booming-of-voice Martin Quinn, as Celia and J.J. Peachum, were the Thenardiers of their time in an immensely enjoyable double act. I loved the swagger McCourt gave Celia and Quinn, as Present Laughter also demonstrated, plays pompous rogue with aplomb. Vickery added lovely touches to perhaps the only virtuous character of the lot such as fussing over the decorum of her surroundings - carefully brushing dirt off the steps leading to the stage before sitting for example. She also has a stand out moment singing Pirate Jenny.

Fryer-Hornsby gets to show the greatest range, imbuing his Mack the Knife with an almost cavalier attitude that crumbles when the hangman's noose beckons. I wasn't as convinced about the character's reputation as a ladies man but there is charm here and he worked well with Jack Scott's Tiger Brown, especially during the Canon Song, a fun demonstration of male camaraderie. Scott plays the police chief with a sense of haplessness that I later learned was partly modelled on Inspector Lestrade from the BBC's Sherlock.

Then there's Roy Joseph who delivers the play's infamous Deus Ex Regina as I like to call it. The Queen herself, on her coronation day no less, ensures that crime does indeed pay. Joseph, following the constant breaking of the fourth wall throughout the production, plays up to the silliness of the reversal in a gloriously over-the-top declaration that had some of his fellow cast members struggling to hold back laughter. Nice assist from Mitchell Bourke with equine inspired antics.

In all, a marvellous production that had me leaving the magical world of the spiegeltent behind with a smile humming what else but Mack The Knife.
Posted by Richard Hyde at 00:18