Speaking of Act One closes, the next production has a pretty decent one as well! Yes, One Day More sung by the massed company from Les Miserables with the orchestra in top form is stirring and memorable. This was a monumental almost three hour show that featured 16 WAAPA graduates including Simon Gleeson as Jean Valjean who gave a fine performance in such a demanding role. His Bring Him Home was a highlight but there were so many here.

The orchestra was superb (Musical Director & Conductor, Geoffrey Castles) and the iconic score sounded wonderful in Her Majesty’s Theatre. The stage somehow didn’t seem as big as the Regent’s so this felt quite intimate even seven rows back. And yes, for the second night in a row a tall dude sat right in front of me [insert more expletives deleted]. 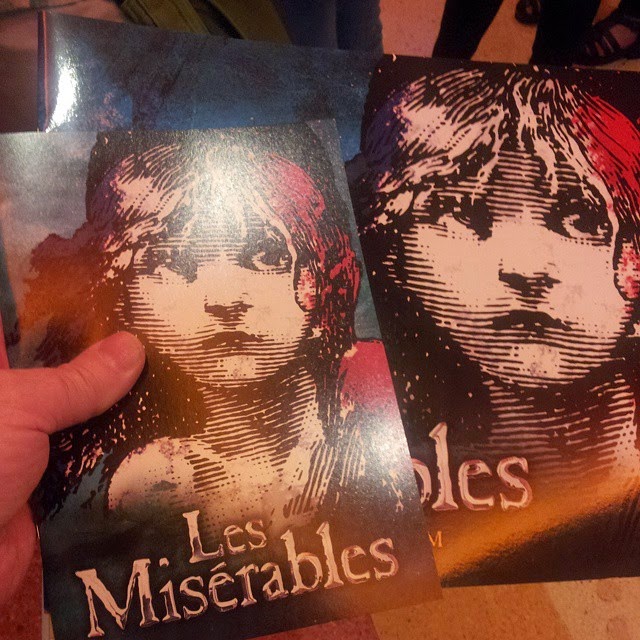 The set was quite simple for the first third featuring mainly backdrops until the wings unfolded when we get to Paris and all sorts of trickery comes into play that was really quite impressive. There was extensive use of smoke and dry ice throughout to diffuse the light but also a lot of shadow and silhouette with characters entering from and receding into darkness that was visually compelling in key dramatic moments.

Unfortunately, a side effect of so much smoke was the amount of coughing from the audience that was vaguely preposterous and increasingly annoying in the quieter moments. The use of projections was inventive with a particularly memorable sequence recreating the sewers under Paris. I’m still trying to work out how they did Javert’s death which was utterly filmic in its execution.

Hayden Tee was a worthy adversary as Javert with Kerrie Anne Greenland excellent as Eponine. Emily Langridge and Euan Dodge worked well together as Cosette and Marius while Lara Mulcahy and Trevor Ashley gave an hilarious comic performance as the Thenardier’s with Master of the House a highlight. The Ensemble was also terrific and this is a show where they get their own moments to shine such as Lovely Ladies and, of course, the work on the Barricades which was nicely designed and executed (pardon the pun). Patrice Tipoki gave a heart-wrenching performance as Fantine with, as ever, I Dreamed A Dream an early highlight.

Special mentions to the young boy who played Gravoche who was amusingly cocky; and the young girl who gave a lovely rendition of Castle on a Cloud. All in all a rousing production that sounded superb vocally and musically.

(Excerpt from Three Musicals and a Blockbuster)
Posted by Richard Hyde at 18:36