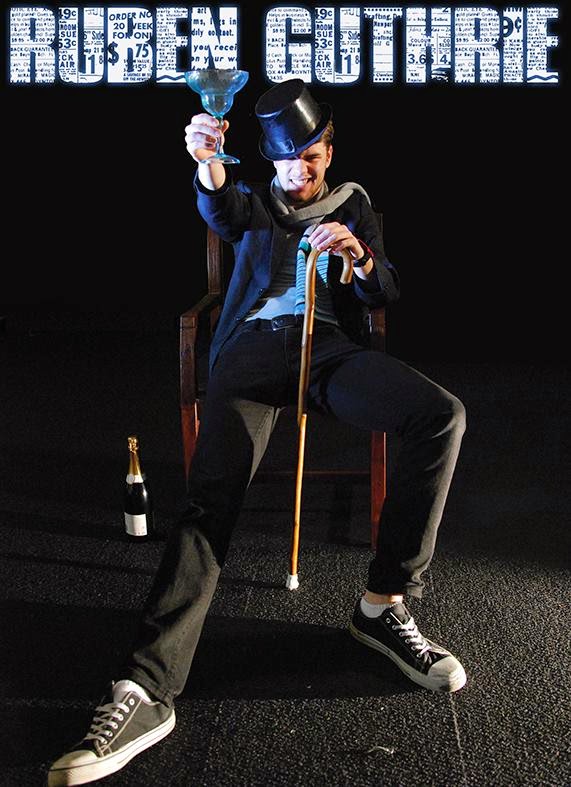 What is the true nature of addiction? What is its source? Genetic? Peer pressure? Lack of willpower? A crutch for doubts and fears? A feeling of invincibility? All of these things? None of them? Can we truly overcome addiction or do the answers to the above questions ultimately determine who we are and what our fate is no matter how valiantly we struggle against our demons?

This is the dark territory Ruben Guthrie tackles, specifically alcohol abuse. It doesn’t pull any punches as it points a white-hot spotlight at the title character and examines his flaws, warts and all. It would be easy to call this a cautionary tale but this is not didactic, it doesn’t preach, and there are no easy answers. The play is more observational and a true character study. In many ways the play is as flawed as Ruben himself but ultimately it is a powerful piece that will linger, its closing moments quite haunting.

So who is Ruben Guthrie (wonderfully played by Nathan Whitebrook)? In a boisterous opening we discover he is a high flying ad executive who has been lauded for the fourth year in a row for yet another brilliant commercial. As a result he goes on a legendary bender which ends up with him diving off a rooftop into a shallow wading pool and breaking his arm. His model girlfriend, Zoya (Amy Johnston) is none too impressed and returns to Prague leaving Ruben alone in an apartment decorated by booze. He sets out to tackle his addiction to the bottle but is challenged every step of the way. Ray (Jarryd Dobson), an executive from Ruben’s advertising agency, alarmed at his decline in creativity as he goes dry, urges remedial action via Vodka. Ruben’s father, Peter (George Ashford), an alcoholic himself, is none too impressed as he admonishes his son; and a friend newly arrived from overseas with a bagful of duty free alcohol, Damian (Sean Guastavino), isn’t helping matters. Yet Ruben perseveres finding a sponsor in Virginia (Roisin Bevan) who he eventually becomes engaged to. Things are going well until events - and his Mum (Eleanor Davidson) - conspire to plummet him back into old habits with calamitous results.

In many ways this tale reminded me of Denzel Washington’s alcoholic pilot in the movie Flight. The character is who he is and despite all his best efforts cannot change that. The fact that Ruben does so well in resisting all the temptations and judgments put before him in the middle section of the play makes the last third tragic, heartbreaking and, at times, difficult to watch. In the best possible way.

Whitebrook is excellent in the title role – charismatic, boisterous, blokey, needy, at times remorseful, fearful, exuberant, vulnerable – he plays the part with great energy and physicality. I must admit I think he did his best work in the quieter moments – the story of his high school friend and protector Corey, a particular highlight; but also as he wonders out aloud whether his condition is hereditary; and when he discovers the consequences of his Dad’s own addiction. Then there is his decision – a brief flicker of faint hope in the face of tragedy - in the very closing moments where he is beaten down and dejected that really will linger with you. The sequence where he falls off the wagon is heartbreaking because, as unlikable as he is at times, we do care and empathise with his plight.

Johnston convincingly plays the leggy young model who grew tired of his antics and her character really is the catalyst both for Ruben’s sobriety and eventual lapse. Dobson adds real humour as the smarmy ad exec with his love of classic Australian advertising jingles and exhortations to Ruben’s vanity and pride. Bevan is initially a much grounded foil for Ruben’s affections but a late character change that nudges her into ‘crazy’ territory, while well conveyed, seemed more plot mechanics than organic.

Guastavino plays the gay friend with a balance between comic sensibility and Ruben’s ‘darker angel’ without teetering into caricature. I was obviously sitting next to friends of his who found the more homo-erotic sections worthy of tittering like schoolgirls over (it’s called acting, lads) which was unfortunate however Guastavino and Whitebrook handle those moments well. Davidson has a tricky role as it’s clearly a much older character but I also found the mother’s motivations and actions difficult to understand, especially a late scene where she attempts to cajole her son into drinking. Finally, Ashforth gives a nice turn as the Dad even though there were times I also questioned his treatment of Ruben. But maybe that’s the point – perhaps it’s the ones who love us most who are the worst enablers?

Ashforth is also notable because, yes, there was The Ruben Guthrie Band, a five piece outfit playing in the wings of which he was a guitarist and singer. The other band members were Eloise Carter, Keith Ong, Jack Middleton and Jordan Norrish. They sang the aforementioned jingles but also classic pop and rock songs (Faith, Toy Soldiers, Summer of 69, Eternal Flame) that added vibrancy to proceedings. The set was awash with neon signs and a whole back wall of alcohol with a well-worn lounge chair the centrepiece.

Not everything worked for me – the play settled down after the (perhaps overly?) exuberant opening and it was the Corey tale when Ruben recalls why he first started drinking that was the actual hook to engage me. The play felt a little long and with no intermission was a solid two hours. The mother, as mentioned, was a problematic character especially given the revelations about the family history. Zoya’s return coincided too clinically with Virginia’s character turn, itself a little arbitrary, to be anything other than plot driven. There were also times when the writing felt too clever – some of the language (“discombobulated”) seemed out of character; there were sly writer’s gags including Zoya telling Ruben to talk in subtext if he was going to be a novelist that came from nowhere; and other 'knowing' reactions off (mis)interpretations of words. All that said though, this is a very strong character study with no easy outs that will make you squirm and make you think. For that it is to be applauded.