First up was Wicked, a show that was all kinds of spectacular. The production was just around the corner in the lovely Regent Theatre in Collins Street. I had a third row seat that was deliciously close to the action, only spoiled somewhat by the six foot tall dude who sat in front of me [insert expletive deleted here].

This really was an impressive show. Lucy Durack was excellent as the comic foil, playing Glinda, and gave a really perky performance with a healthy dose of physical comedy. But it was Jemma Rix as Elphaba who was truly outstanding. Steve Danielson was an immensely likeable Fiyero, Anne Wood had a little Hunger Games going on as Madame Morrible, and Emily Cascarino quietly shone as Nessarose. The rest of the supporting cast, including the venerable Reg Livermore as The Wizard, were terrific. 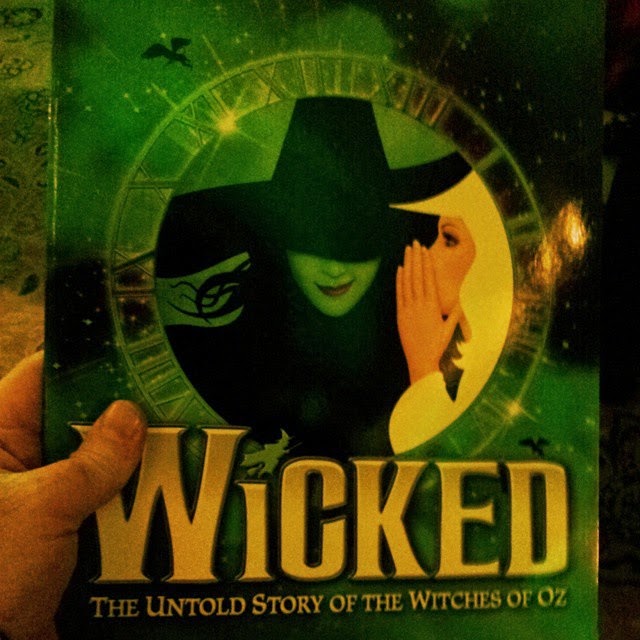 The set was elaborately constructed and moved like clockwork, no surprise given that clock faces and gears were a recurring motif. The lighting was superb and this was a glorious production to look at. The Wizard’s “giant head” prop was something to be seen (and heard) but curiously the mechanical dragon that loomed above it all was used only in the Overture never to be revisited.

The costuming was colourful and inventive, particularly the flying monkeys and the whole thing was slickly produced, sounded great, and was firing on all cylinders.

I particularly liked how clever the writing was, incorporating familiar elements from The Wizard of Oz but shining them through the prism of a classic storytelling ‘what if?’ What if Glinda the Good and The Wicked Witch of the West had once been friends? Memo to George Lucas – THIS is how you do a prequel about a person’s descent to the dark side!

Wicked has maybe the best end to an Act One ever, certainly that I’ve seen. The staging, lighting, singing and special effects work on Defying Gravity was outstanding and left the audience gasping in appreciation as they broke for Intermission. What a way to kick off my musicals junket!

(Excerpt from Three Musicals and a Blockbuster)
Posted by Richard Hyde at 18:32