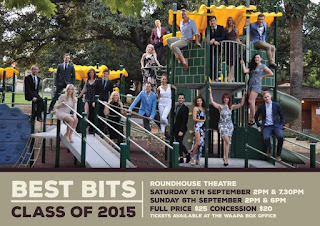 Almost 18 months ago I went along to the Enright Studio to see the first public performance of the then second year musical theatre class. As is the WAAPA way this inaugural outing isn’t a musical at all. In this case it was an abridged version of the sprawling Australian play Beach. Twenty brand new faces. Twenty performers you’ll slowly get to know as you watch their potential blossom over the coming months. It’s an exciting time as the next crop of talent is unveiled. From my review at the time:

“Talking to the director afterwards, this was the acting debut of many of the students in front of a paying audience. There is some singing – enough to be excited for future musical productions – but this is mainly a mix of comedy, drama, and skits. I’m not sure it entirely worked for me as a coherent play but it did showcase the talent of the second year musical theatre class. Everyone had an opportunity to shine and the production went without a hitch.”

Fast forward to today where that excitement and talent has developed into a stellar graduating class. Best Bits is a fun show because it celebrates their joint achievements, lampooning the four musicals they go on to perform after that initial introduction. It also gives us a glimpse into the enormous amount of work and training they undertake outside of the public eye. Each performer - now 19 in total - has a featured moment and the vocal talent across the board is superlative. Above all it’s funny, entertaining, and has a looser, raw feeling that is very engaging. The latter is by necessity as their final musical finished only a week ago – spontaneity breeds creativity.

Appropriately, the show opens in homage to Beach as the group takes to the stage in bathers before each individual gives us a snippet of a song I’m assuming they performed in their very first week on campus (“O-Week Audition Medley”). Chris Wilcox and Taryn Ryan, reprising their roles as Officer Lockstock and Little Sally from Urinetown, act as hosts of sorts as they guide us through a selection of songs interspersed with mischievously condensed versions of Children of Eden, Urinetown, Legally Blonde and Carrie the Musical. In comparison to last year's show there isn’t as much focus on dancing but, as mentioned, the singing ability reverberates around the intimate Roundhouse Theatre as do the acting chops in the more interactive numbers.

Sondheim was certainly a popular source of songs with Joel Granger and Rosabelle Elliott performing Kiss Me; Morgan Palmer taking on Not While I’m Around; while Daniel Ridolfi excelled with Epiphany (all from Sweeney Todd); with Taryn Ryan tackling Getting Married Today from Company with aplomb. A special mention to Timothy How who accompanied the group on piano and only received the sheet music the day before. “Too much Sweeney Todd” he lamented afterwards but his playing was a highlight.

A few of the other highlights (among many) for me were: Kate Thomas reminding us how good she was as Elle Woods with the title number from Legally Blonde; Tayla Jarrett (who also showed a deft comic touch throughout) on piano singing The Hill from Once; two beautifully sung numbers by Harry Prouse (I, Who Have Nothing) and Callum Sandercock (Music of the Night); the original crowd pleasing cabaret piece Bath by Matthew Hyde; and a sultry Call From The Vatican by Baylie Carson.

I also enjoyed Matilda Moran's Maybe I Like It This Way; Heather Manley's Papa Can You Hear Me?; and Alex Thompson's How Glory Goes. Chris Wilcox continues to exhibit a sly sense of humour that is captivating (as well as getting his U2 on) and I really like Joel Granger's and Taryn Ryan's stage presence from an acting perspective.

Megan Kozak showed off some fine yodeling talent with Roll in the Hay and Jess Phillippi had me tapping my feet along happily to I Can Do Better Than That from The Last Five Years. Jacob Dibb gave a playful rendition of Rosemary and Joe Meldrum cut a fine figure during Easy Street from Annie.
It's safe to say everyone was impressive and the sheer talent across this group is a delight. As is their obvious chemistry with, I have to say, a lot of snogging going on and great comic timing. Look out for a very funny running gag in the Carrie sequence.

It all ends with the entire class singing In The Beginning from Children of Eden, a fine dropping off point as thoughts turn towards Showcase, graduation, and a professional career in musical theatre. That’s all still to come, however. For now though, this was a relaxed, funny, and entertaining look back at the last three years for an exceptionally talented group of young performers. I wish them all the very best and look forward to seeing them on stages across the country in the near future.

There are two more shows - Sunday 6 September at 2pm and 6pm. Ticket sales at the venue.
Posted by Richard Hyde at 00:49