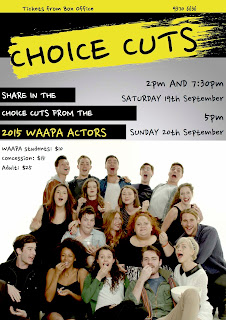 I talked briefly to Andrew Lewis (Associate Professor and Associate Head of School for Performance at WAAPA) in the glorious Spring sunshine after this compact one hour show by the graduating acting class. A couple of key topics emerged - the emphasis on accent work which was clearly apparent during this retrospective; and how each class, be it musical theatre or acting cohort, has its own collective personality.

When you see Australian actors getting roles overseas in both movies and increasingly in high end US drama, they are universally praised for their ability to seamlessly adopt (predominantly) American accents. That is no doubt in large part to the excellent training in this area at world class academies like WAAPA. But there was a range of accents on display this afternoon and that was, in itself, a feature.

The second point was forming in my mind as I watched Choice Cuts. This is only the second year I have attended WAAPA productions in large numbers, mainly the acting and musical theatre streams. Each of those groups, of course, have their individual personalities, but it strikes me that as a collective there is a distinct dynamic and group personality that is unique to each year. It's difficult to explain but it seems clear in the way they interact both on and off the stage and every year and course is different. A kind of hive entity if you will with its own sense of humour, style and outlook. However, I hadn't quite grasped what that was for this year's acting class until only recently with the excellent The Mars Project and this very show today. It took me a while but I finally got there which was kind of exciting.

To the show itself and this fairly hummed along at a brisk one hour running time. There were snippets of past shows - Columbinus, Blood Wedding, Punk Rock, Grapes of Wrath, All My Sons, Measure for Measure, Thezmophoriazusae, Pride and Prejudice, The Playboy of the Western World, and The Mars Project -  and even a theatrical 'trailer' of sorts for the upcoming Macbeth, recreated here as 'Macbeth in a Minute'. Spoiler alert, everyone dies... hilariously.

Some of the other highlights: 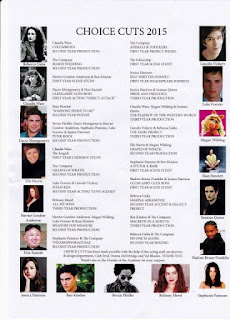 A chilling moment from Punk Rock especially a visceral beat between Harriet Gordon-Anderson and Bevan Pfeiffer;

Rian Howlett's rapid fire, tongue twisting alliteration of Someone Spoke to Me;

Dacre Montgomery getting his Shelley Levene and American accent on with a profanity laced tirade at Hoa Xuande in a scene from Glengarry Glen Ross;

The company getting loose and funky in several moments: Stephanie Panozzo's amusing mangling of Aretha's Respect with the others in coordinated support; the abrogation of self in the Animals & Toddlers exercise; and the hilarious recreation of The Fellowship scene from Lord of the Rings (the first one) that had everyone in stitches;

Lincoln Vickery's abuse of poor Rebecca Gulia in a memorable monologue from The Mars Project;

Elle Harris and Megan Wilding both so good in a mesmerising scene from the Grapes of Wrath;

Luke Fewster and Lincoln Vickery likewise in a scene from The Judas Kiss;

Stephanie Panozzo and Ben Kindon crushing a very funny scene A Stud & A Babe which showcased their singing ability as well as their comic timing; and

Rebecca Gulia singing a song I absolutely adore to close the show - Sondheim's glorious No One Is Alone from Into The Woods - which she did so beautifully before the rest of the group joined in as they said their final farewells.

And then they were gone.

It was sharp, short and almost too perfect. I wanted more. I wanted my customary intermission cider in the lobby before the second half. But in many ways it was fitting. There will be more - much more - once this group move into their professional careers and we see them on screens, large and small, and on the stage again.

There are only two more shows, tonight at 7.30pm and tomorrow at 5pm. An hour of your time to see another great graduating class. All of them were terrific. Go see it!