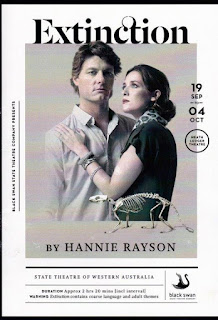 The head of a mining company (Matt Dyktynski) hits a rare tiger quoll on a country road near where he grew up. Understanding the magnitude of the tragedy – the tiger quoll hasn’t been spotted in over a decade – he takes the injured animal to the vet where he initially meets a young zoologist (Hannah Day) and eventually her partner, the vet himself (Myles Pollard). So starts his quest to save the species using $2 million of his company’s mining profits to convince the vet’s sister, the academic head of a research institute (Sarah McNeill), to assist. The dilemma is obvious – big business versus the environment writ large in the academic’s compromised position. There are various romantic entanglements along the way and a subplot involving one of the character’s own physical demise.

Such is the story at the second preview of this world premiere Hannie Rayson play.

Let me say first up that I thought the cast was very good. Hannah Day was excellent as the spunky American zoologist who is idealistic, compassionate and motivated by her love of animals and the environment. Dyktynski gave the mining head a larrikin, knockabout sort of quality that was engaging and provided most of the sporadic humour. Pollard is such a strong physical presence that it’s interesting when his character’s body betrays him, bringing an anger and rage that was believable. McNeill gives the somewhat uptight and vaguely superior academic a few wrinkles of self-doubt mainly to do with her own personal situation.

It’s a pity then that the material doesn’t give them much to work with. Everyone talks in exposition – within a couple of minutes of meeting the mining head and zoologist are exchanging detailed aspects of their backstories – and when they’re not doing that they are merely archetypes for arguments about the environment versus big business. It made it difficult to have any emotional connection with any of the characters as they spewed forth facts, figures, positions, arguments and detailed personal resumes.

The most egregious example of this was early in the second act when brother and sister are arguing about her decision to take the ‘dirty money’ to help save the quolls. During this the brother drops a box because he is physically incapable of holding it. She continues the argument with not even a pause as we witness the first serious sign of his decline. I was gobsmacked. It’s your brother! No reaction. No response. Nothing!

Later the scene changes so that he verbally assaults her for not understanding his condition and fearful of her pity. Putting aside the fact he clutches at his sister with enough strength to hurt her whereas moments before he could barely hold anything, this actually showed a moment of real conflict and rage on his part. He tells his sister that her decision to take the mining money is what will end their relationship and that he will oppose her at every turn. If only this had been much earlier and actually formed the spine of the narrative.

Instead we get a series of increasingly convoluted relationship dilemmas that felt forced to service an underwhelming climax. One decision by the mining head, in particular, struck me as quite inexplicable given what had come before and led to a long scene between himself and the academic that belonged to another play. It, however, was a necessary plot point for where the play ends up. Which is some tonally jarring shtick as the relationship dilemmas turn into farce and all is saved by an unlikely antagonist and some IT magic I was struggling to find credible.

While the sound design was excellent with the aural representation of the bush and its inhabitants nicely rendered, the set itself was a major disappointment. Perhaps I have been spoilt by some truly wonderful sets at previous Black Swan productions like Laughter on the 23rd Floor, the real estate office from Glengarry Glen Ross, and especially Blithe Spirit but this was sparse to say the least. It is a very big space with a small cast so the bunker style approach with lots of scrims and back projections and minimal trappings was bleak indeed.

The only time the set impressed was at the start of the second act when we are in the bush and the representation was wonderfully done. The technical feat of dismantling that brief mirage and re-establishing the bunker was fascinating but quickly plummeted me back into monolithic gloom.

The play clocked in at well over two hours and with the lack of a clear through line or rising stakes it felt overly long and flat. Plot machinations come late and feel contrived after putting so many balls in the air early. Yes, there are some interesting arguments presented and the mining position is given fair representation but this felt more debate than drama. It was a strong debut by Day in her first Black Swan production, however, the script needed a lot more punch to make this engaging.