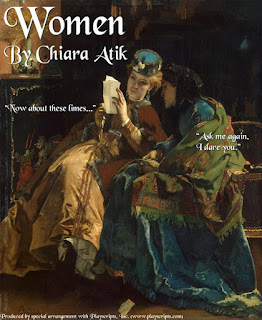 Inject modern day attitude and vernacular into a period setting and you get a funny reimagining of the novel Little Women. Set at the end of the American Civil War this iteration of the March family isn’t quite as genteel as one might expect. Of course, the conceit of transporting a sitcom style quartet of sisters to the past is the wellspring for the humour.

At its best this production honours that premise as the sisters played by Shannen Precious (Jo), Cat Perez (Meg), Claire Tebbutt (Amy) and Virginia Cole (Beth) crackle and fizz off each other to amusing effect. When they are separated through (did they have spoiler alerts in the 19th century?) death and the lure of prospects further afield from dreary Concord, Massachusetts, the play loses a lot of its driving force until the surviving members are reunited at the end. That is more a testament to the chemistry of the core foursome than a reflection of the supporting cast who have important roles in creating the context of the world our heroines have stumbled into.

In essence the play revolves around which sister will become the pre-eminent member of the family and achieve their dreams once Marmee has left to be by their ailing father’s side. Perez brings tremendous sass to her role as Meg with plenty of razor sharp quips and asides. Occasionally though she would appear to address her remarks to the audience with very specific eye contact. That breaking of the fourth wall felt more unintentional rather than a stylistic choice and something to be mindful of. Her main ‘rival’ for ascendancy, Jo, is drolly portrayed by Precious and the contrast in styles worked well. Jo dreams of becoming a writer and her attempts at cajoling her siblings into impromptu performances of original plays sets the tone early.

Tebbutt’s ditzy Amy is played with affectionate naivety in another clearly delineated role. The mock concern for Beth’s fading health is wonderfully zany as she lurks on the fringes of the stage unwilling to come any closer. Cole is all tragic beauty and fragility as Beth succumbs to her fate. It is, by necessity, the most muted role with the exception of a cheeky moment as coughs turn into a beatbox jam.

Surrounding this core are characters that are far more grounded which allows room for the zaniness to work. Notable amongst these are Maddy Jolly Fuentes whose Marmee is maternal concern writ large in a turn that does fit the period in question. Matthew Abercromby is an earnest, kind-hearted Mister Brooke who suffers the moods of the hyper-kinetic Meg in essentially a straight man role. Will Moriarty also lends a certain solemnity as Professor Bhaer. Michael Casas, however, tackles his various characters as if he was indeed in a sitcom and they tended to slide into caricature, given away by an impish grin.

Which leaves Hock Edwards as Laurie to provide the main object of attention as the other great conceit of the play is that none of the sisters has ever met a man before, no, not even a cousin. His is a character that is oddly caught between the archetypal period love interest and a more modern, conflicted interpretation. Edwards has a strong moment when romantic desire turns to humiliation as Laurie is rebuffed by Jo causing the character to flee the country. As you do.

Director Jessica Serio keeps the pace humming along as befits the style of humour. Scene transitions are quick with the stagehands adeptly redressing the set to represent the March household and a few other key locations. The various Perez monologues as Meg ‘reads’ letters to her sisters are more effectively staged when we see the other characters acting out what she imagines is happening in places like New York.

Overall this was a funny production that worked best when the four sisters were together with the banter running thick and fast. This is Black Martini Theatre’s second comedy for the year and it is a niche they are comfortably occupying in the Murdoch theatre firmament.
Posted by Richard Hyde at 11:55