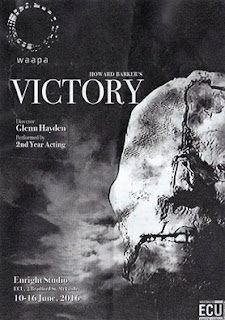 Without letting the head completely out of the bag this a fascinating production by the 2nd year acting students.

Howard Barker's play set in Restoration England seems to deliberately go out of its way at the start to alienate the audience with obscene language and provocatively staged sexual acts. Then it eases into the bleakest of possible black comedies culminating in two truly intense and disturbing scenes at the end of each act that would sit comfortably in any Game of Thrones compendium of perversity. Its humour is uncomfortable, its essential tragic nature compelling.

It also reminded me a little of the sort of attention to detail and scope David Simon deploys in his television writing, notably The Wire. Here we see points of view from the people, the monarchy, the bureacracy represented by the newly formed Bank of England, and the arts represented by Clegg and the great John Milton. It creates a fully realised world with competing perspectives and desires.

What I really liked is that the stage, essentially a perfectly raked sand pit on the Enright Studio floor, ends up littered with props, items of costuming, fake blood, and any manner of detritus as the actors cavort and contort in the space. It's messy and ugly and real.

Stand out performances - Stephanie Somerville covers a wide range of emotions as the widowed Bradshaw whose husband's body she sets out to retrieve and is excellent in the lead role; Jack Scott projects Droog like menace as Nodd; Kingsley O'Connor's Charles II is a more conflicted Joffrey style monarch who both chills and cajoles; while Jake Fryer-Horsby is amusing and later affecting as the pragmatic McConnochie. A mention as well to Mitchell Bourke who plays the tragi-comic fool Ball with a swagger that is cruelly cut down.

Commendations though to the entire cast for attacking such a difficult play with inhibition-free exuberance. No easy thing given some of its content.

I really enjoyed this but it's not for the faint-hearted as exemplified by eleven audience members not returning after intermission. But if theatre is there to provoke thought and reaction, and if dark humour is your thing, then this is the type of play you're not likely to see too often outside the walls of WAAPA.

Written by Howard Barker, Directed by Glenn Hayden and starring the second year acting students, Victory is at the Enright Studio until 16 June.
Posted by Richard Hyde at 12:14