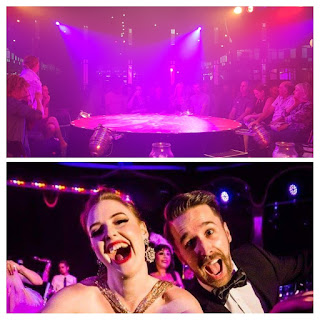 A white hot nine piece band under the command of Jessica Herbert; the irrepressible Jessie Gordon on vocals and sequins with partner in crime the suave 'don't ask me to dance' Mark Turner; joined by performers from Sugar Blue Burlesque adding pizzaz and plumage, this is slinky, sexy, sassy, saxy, bright and brassy.

Watching this in the De Parel Spiegeltent was like stepping into a Speakeasy and it's no wonder songs from Cabaret and Chicago featured.

This whizzed by, indeed it ended a little abruptly at the 50 minute mark. I could have settled in for an evening of 'jazz and liquor' in this thigh slapping, toe tapping romp. A great way to kick off an evening at Fringe.

Last year I was comp'd to review this Fringe World behemoth. I was so impressed that this year I bought 'posh seat' tickets to take mum and dad along for mum's birthday.

Favourites Captain Frodo and Hamish McCann remain to be joined by a bevy of new acts with some truly spectacular inclusions. We had great seats, the service was excellent, and the show was yet again amazing.

La Soiree is a jaw dropping mixture of grace, power, strength and precision with a liberal addition of hijinks and tomfoolery.

The show is perhaps at its best when it goes vertical - McCann's poledance routine is fast becoming legendary; aerialist Katharine Arnold was stunning on the rope in more ways than one; Bret Pfister is coolly efficient and precise on the suspended hoop; and the English Gents reign supreme, this time with a new tower of strength to accompany McCann.

Frodo is the wince inducing contortionist and clown supreme with chanteuse Acantha Lang adding pipes and legs forever. There are other surprises involving bananas and, let's just say, quick costume changes though Scotty the Blue Bunny was a weak link.

The show ends with the gasp worthy Leo & Ursula who add a shot of adrenaline with an act on rollerskates that has to be seen to be believed.

*originally published at facebook.com/perththeatrereviews
Posted by Richard Hyde at 00:16