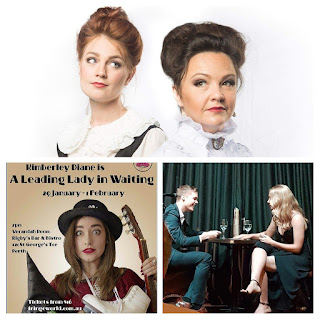 For many people music provides the aural signposts to important moments in their lives - memories, significant events, people. For Kimberley Diane that soundtrack is not only for personal highlights and lowpoints but tracks a career drenched in music, notably musical theatre.

The show follows her love affair with musicals and the roles she has played and hopes to play in the future. This gives us an eclectic set of songs from traditional musicals such as Guys and Dolls, My Fair Lady, and Mary Poppins to a couple of Andrew Lloyd Webber's most well known songs, to Jason Robert Brown, Wicked and even a song from The Wedding Singer! All of them wonderfully sung with impressive sound quality and crispness upstairs at Rigby's.

Kimberley is personable and engaging in the intimate space and the insight and context she provides between songs is relatable and charming. Throw in more costume changes than a Cher concert and a surprise makeover and this is a celebration of the passion, commitment, and talent required to follow your dreams and idols.

And when those idols are among the biggest names in movie and theatre history you know you're in for a fabulous show.

Only one more left, Wednesday night at Rigby's. Definitely recommended.

Today I bravely set forth from my well of sadness. I visited a magical place where a mistress of the house and her handmaiden regaled me with tales of Him. There was spirits/booze, a ukulele and an itsy weensy piano. I laughed gaily. Many ups and downs on the stepladder of life. Must tell friends.

Let's not beat around the bush - this is my gem of Fringe to date. Beautifully written script - witty, clever, literate, sly - given great service by two terrific performances courtesy of Lisa Louttit and Taryn Ryan. The former plays a vacuous mistress who seemingly knows nothing of real love or even life beyond the strictures of her class; the latter a servant with a peasant upbringing whose burgeoning spark of life inspires and confounds her mistress.

The device of the duelling diaries that feed off each other as the women compete over the lovely mcguffin of 'Him' is astutely calibrated both in writing and performance.

Throw in a clutch of original songs and meticulous use of blocking to represent relative status on the simple set which features a stepladder and you have a smart, funny, and entertaining play that is a must see at the Flaming Locomotive.

I can say with no hesitation, "I wasn't bored, Miss."

Take two talented performers, an outstanding accompanist, a roster of standards, a comfortable venue, and the threat of puppetry and you have a cabaret show that is like a cool breeze on a summer's day.

But let's face it, there are plenty of shows at Fringe that have those elements (well, except, sadly, the puppetry). What elevates Cheek to Cheek to the top ranks is the outstanding chemistry Kozak and Prouse share. There is an immediate ease to their onstage schtick as they bounce off each other with banter between songs and interaction during them.

This show has a loose framing narrative unlike last year's Dinner Is Served. Here it is their relocation to Melbourne and all the things that come with the struggle to move from 'Burritos to Broadway'. Prouse plays the straight man with consummate charm which allows Kozak to vamp in her screwball comedic style. It's a joy to watch especially those little unscripted moments that feel spontaneous and totally organic.

David Wickham adds class on keyboard with an expressive playing style that is fascinating in its own right. He also shows real joy at his stage mates' antics.

The chemistry is best exemplified during the back and forth of Anything You Can Do. Other songs include I've Got You Under My Skin, The Trolley Song, Smile, and a helping of Streisand. All wonderfully sung.

I'd tell you to rush out and buy a ticket but the run is sold out. And rightfully so.

*originally published at facebook.com/perththeatrereviews
Posted by Richard Hyde at 00:28