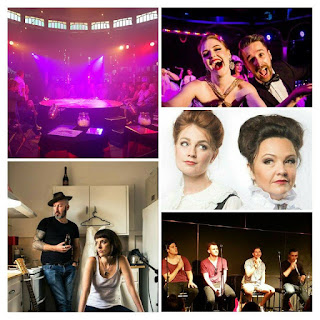 That's me done for Fringe for another year. A relaxed and entertaining run of 17 shows that I enjoyed very much. Thank you to all the performers, musicians, and the raft of people behind the scenes making it all work so smoothly.

Now, as anyone who follows me knows, I like a good list so here are my Top 5 shows and some notable contributors...

1. LA SOIREE - Led by Captain Frodo and The English Gents with a plethora of superhuman individuals this is like The Avengers of Fringe shows.


2. THE ONE BY JEFFREY JAY FOWLER - My tip for the Martin Sims Award for best local production.

3. WHEN HE GETS THAT WAY - The unexpected gem of my festival experience with a cracking script and a duo of great performances.

4. WRONG DIRECTION - The raucous boy band pisstake that was so wrong it was oh so right.

5. A HOT HARLEM ROMP - Powered by a white hot jazz band this had style to burn.

There were many fine performances but a few in particular that caught my eye...


GEORGIA KING - Terrific in The One playing a woman aghast at the prospect of marriage and all its ramifications.

JEFFREY JAY FOWLER - While I wasn't as big a fan of Price Tag, that play, The One and a reprise of Fag/Stag mark Fowler as a significant writing presence at this year's Fringe.

Lisa Louttit - a wonderfully calibrated comic performance in When He Gets That Way.

Lucy Ross - her rendition of Amazing Grace alone blew the doors off The Brisbane in her very funny musical Guess Who's Coming To Dinner.

Kimberley Harris (as Kimberley Diane) - excelled in a thoroughly charming one person show about chasing your dreams.

Mark Storen - added significant musical chops in The One as well as being a terrific counterpoint to King.

*originally published at facebook.com/perththeatrereviews
Posted by Richard Hyde at 09:14