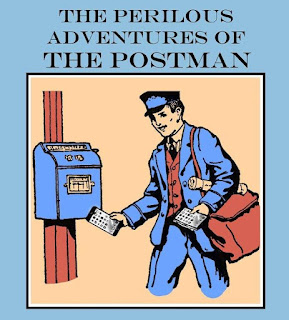 As technology plays an ever more pervasive role in our lives, the prevalence of social media and its impact on human interaction has become a favourite topic for dramatists. This is especially the case for younger generations who are living through the explosion in apps and devices that demand more and more of their attention. How is this wiring our brains differently? How is it affecting relationships and communities and, significantly, the individual who may be better connected but as a result more isolated?

Writer/director Damon Lockwood has taken these concerns and extrapolated them out to the year 2020 where social media is the dominant form of interaction. All other institutions and social norms have decayed, most notably the status of the humble post office, the most anachronistic of services in a fully digital world.

Lockwood pushes the premise to absurd extremes as the main generator of the comedy in this near future world. Young people's heads are forever buried in their mobile devices. Eye contact is shunned as almost unnatural. Older technologies, if recognised, have taken on an aura of archaeological artefacts – the landline, the fax machine, the pre-smartphone mobile, and books. There are even workshops that encourage people to try and interact in person. They are largely unsuccessful. Mating rituals are conducted via apps and online platforms. Shopping is largely automated.

Amongst the eyes down, thumbs blazing digital morass is a beacon of the pre-digital age, now hopelessly redundant, the postman himself, played by, curiously for a student production, Curtin lecturer Philip Miolin. Regarded as a pervert (due to his predilection for actual human contact) by our gaggle of social media mad youngsters he lives on the fringes until the world faces an horrendous cataclysm too heinous to contemplate…

The online world is switched OFF in a massive failure of servers.

Much screaming ensues. In fact, in the close quarters of the Studio space at the Blue Room, a deafening amount of screaming. How can one live in a world without the internet; without social media; without the ability to cyber-stalk potential partners? Quelle horreur!

The postman is summoned by a Mad Max obsessed Postal executive who puts the General in Postmaster General, Ben Strong played with scene chewing relish by Taylor Beilby. It seems the world’s last letter is in his possession and must be delivered to a man whose life may be in danger across a now dystopian landscape of bereft youngsters.

So anachronistic is the concept of a letter even the production staff forgot that such a vessel requires a stamp (not to mention a story beat that requires a youngster to drop what looked like a $10 note, surely an abstraction for that age group now let alone in 2020) … but I digress. What follows next is a bizarre series of encounters that seem more like individual skits than a coherent narrative through line. Granted, it is a difficult task to give a cast of fifteen actors sufficient stage time but some of the characters are marginal at best. There was one long monologue from a character that came from nowhere, raved on about some implausible scenario then vanished in a burst of B-grade villainous laughter never to be seen again.

It seems the Postman is such a good chap that he can’t but help people who, coincidentally, come across his path. There is a lot of convenient plotting that felt more lazy than inspired in the general wackiness of what was going on. Ultimately the Postman reaches his destination where there is a surprise reveal which is problematic as Miolin’s age versus that of a presumptive love interest is significant.

The humour is very broad and mostly slapstick with a lot of one-note reactions to the modern versus old technologies. I found it sporadically funny with some inventive delivery of props and a crazy showdown between the Postman and his natural enemy, the pet dog.

The actors who fared best for me were Lauren Beeton as Heather who was allowed a more naturalistic reign as one of the online lovers; Beilby who delivered a full-on assault as Ben Strong; Joanna Tu who was amusingly officious as the Workshop Leader, and later as a somewhat confused Kiwi cartographer; and Bianca Roose proved a quiet presence playing a character not held in thrall by technology. Samuel Ireland had his moments as the other half of the lovers though he lapsed into the preponderance of shouting that befell a lot of characters. It certainly is not a subtle comedy. Maddy Mullins played audience favourite Workshop Girl though this was more through sympathy as the character’s earnest attempts at inclusion are constantly rebuffed.

Designer Rhiannon Walker has eschewed the usual darker tones of the Blue Room providing an all-white set including panels on which images are occasionally projected. These establish locations, for example the library or the post office though I was surprised they weren’t used for the ‘travelling montage’.

While this style of comedy wasn’t my cup of pixels, many in the audience, especially of contemporary age to the performers, seemed to be having a good time with it all.
Posted by Richard Hyde at 22:06