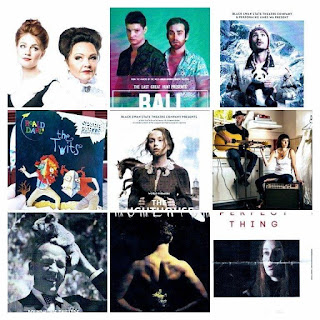 Here we are again. Another year gone. Another year full of theatrical treats. Yes, I know I said I wouldn’t be reviewing in 2017. But as some predicted, late in the year, the bug bit and I was back to writing full reviews instead of snippets. Three of those became among the most viewed ever on the blog which is gratifying. However, I didn’t see anywhere near the record number of productions from last year. Though over 50 wasn’t a bad effort all things considered. The main ‘thing’ being eight drafts of a feature film screenplay which is coming along nicely.

Back to theatre and it was a solid year for plays. My reduced attendance level meant I mainly stuck to the major hubs – WAAPA, Black Swan, The Blue Room, and Fringe. But there was much to like amongst those offerings. I was pleased to have been asked to retrospectively adjudicate the 2015 & 2016 Best New Work and Independent Production for the PAWA Awards. Enticements to be an adjudicator next year for both PAWA and the ITA were tempting but hopefully 2018 is the year my screenplay goes into production so I declined.

Enough with the preamble, here now my Top Ten plays and performers of the year…

The continued adventures of Jimmy and Corgan who we first saw in FAG/STAG was immensely entertaining, moving, and thought provoking. Jeffrey Jay Fowler and Chris Isaacs are consummate storytellers and this sees them at the top of their very considerable game.

“On the surface this is a witty comedy but like its predecessor the control of tone is exceptional with exquisite observation, raw emotion that is earned, and sequences… that are gut punch effective. Fowler and Isaacs have an immensely likable rapport and as writer/performers have total command of the material. The audience can be belly laughing one moment to pin drop silent the next.”

I had no expectations going into this self-devised piece using the Moment Work technique introduced by visiting director Andy Paris. What I experienced was emotionally raw and honest with a great sense of theatricality in the blank canvas that is the Enright Studio.

“In its shape and construction Momentum is reminiscent of Love and Information, currently being performed by the 3rd years. However, there is an emotional authenticity and rawness here that is compelling in its honesty. The whole troupe have shared insights into pivotal moments in their lives and it's this vulnerability and generosity that makes Momentum a remarkable work.”

A terrific example of what happens when you match an excellent script with a first-rate cast in this engrossing psychological thriller.

“An exceptional script performed with precision and emotional depth by a stellar cast of Daisy Coyle, Nick Maclaine, and Andrew Hale.”

WAAPA brings more than a touch of class from all its departments to this suitably witty Noel Coward penned tale. From set and costume design to performance this was an elegant treat.

“I had a great time with this Noel Coward comedy - witty and elegant this featured a handsome set, was stylishly costumed, briskly paced, with many wonderful performances by the third years.”

Fast becoming my favourite local playwright, Will O’Mahony’s gift for dialogue is often exhilarating. That it is usually deployed in the service of stories that have bitter-sweet emotional cores and intriguing premises makes his love for language even more potent.

“The cast embrace the material - an exploration of loss, letting go, chasing perfection, and the expectations of parents and their children - within the framework of characters inhabiting this fantastical space while in a coma.”

6. The One by Jeffrey Jay Fowler - Whiskey & Boots

“First rate performances by Georgia King and Mark Storen; the former in a layered portrayal that incorporated a level of warmth I hadn't seen from her before; the latter with an almost wide-eyed naivety that slowly turns into a hard-earned epiphany. There is an ease and believability to the characters' relationship that is compelling.”

7. When He Gets That Way by Ann Marie Healy

Another two-hander from Fringe that was witty and sly, again featuring two standout performances. Everything you could want amongst the often brash madness of the festival.

“Let's not beat around the bush - this is my gem of Fringe to date. Beautifully written script - witty, clever, literate, sly - given great service by two terrific performances courtesy of Lisa Louttit and Taryn Ryan.”

The season doesn’t start until early January and Spare Parts asked for reviews to be held until the New Year. That being said, I wish my 6-year-old niece was over here from Canberra because I would take her to this in a heartbeat. Full review to be posted on 2 January.

“This is an enjoyable production that children and adults alike will love. Full of colour and movement; humour and a positive message, it will be a summer hit for Spare Parts Puppet Theatre.”

A companion piece to playwright Hellie Turner’s own The Dreaming Hill, this is a beautifully crafted, old fashioned style tale that generates enormous empathy from the star making performance of Daisy Coyle.

“Coyle is joined by a crack cast of newcomers and stage veterans. The play itself feels very much a throwback to old-fashioned storytelling with its own guileless charms. We know what awaits the troops steaming off to war and portents of doom are therefore flickering beats instead of heavy-handed assaults.”

Featuring a superb set and lighting design as well as a warm and generous central performance this was a late year delight.

“At a smidge over an hour in length this was charming storytelling even in its moments of sorrow, anchored by Richards’ warm delivery and that fabulous set. A most pleasurable evening of theatre presented by the Aboriginal Performance students.”

The Curtin University graduate announced herself as one to watch with last year’s Project Xan. A promise she more than lived up to in 2017 as the eponymous lead of The Lighthouse Girl and with a layered performance in An Almost Perfect Thing. Coyle has the ability to project youthful innocence and vulnerability that served her well in the Black Swan production but also a darker persona that made her character so intriguing at the Blue Room. There is an emotional honesty to Coyle’s acting that is compelling.

Performer is a misnomer here though Fowler was excellent reprising his character from FAG/STAG in Bali. He is one of the premier playwrights in WA as The One and Bali (with Chris Isaacs) demonstrated in 2017. Also, as a member of independent powerhouse The Last Great Hunt, an associate director for Black Swan State Theatre Company and Director of New Writing for their Emerging Writers Group, Fowler dominated the local theatre scene this year.

I must confess I wasn’t quite sure about Quinn in his second year at WAAPA. The plummy voiced actor tended to stand out from his fellow students with a more theatrical style that didn’t quite gel for me. He turned me right around in 2017 with a couple of roles that suited him perfectly – the lead in Noel Coward’s Present Laughter that he excelled at and as Mister Peachum in The Threepenny Opera which, spoiler alert, may make an appearance in another list today.

My 2014 Female Performer of the Year, King returns to my end of year lists with a stellar performance in The One that was as full tilt and ego-less as I’ve come to expect but also showcased a softer side that added yet another layer.

A wonderfully calibrated comic performance in the gem of a show from Fringe, When He Gets That Way. Louttit embraced the sharp writing with aplomb.

Brilliant comic timing accentuated what, on the surface, could have been a ridiculous role, that of a talking panda in Will O’Mahony’s Coma Land. Yet added gravitas as well in a memorable performance.

In the true ensemble piece Momentum from WAAPA’s second year actors, Corlett made an immediate impression with a fierce, no holds barred performance.

Email ThisBlogThis!Share to TwitterShare to FacebookShare to Pinterest
Labels: An Almost Perfect Thing, Bali, Coma Land, Daisy Coyle, Jeffrey Jay Fowler, Momentum, Perth Theatre Reviews, Present Laughter, The Lighthouse Girl, The One By Jeffrey Jay Fowler, The Twits, When He Gets That Way