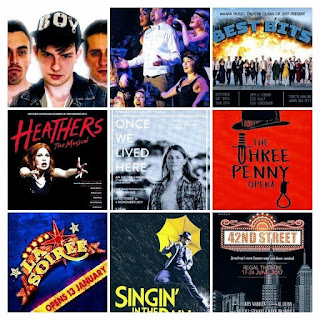 I was almost tempted to expand this category to include concerts. I decided against it but I would like to acknowledge the two shows that prompted the thought. Those are Megan Washington’s excellent concert at the Geoff Gibbs Theatre with the WAAPA Jazz students; and the 30 Year Anniversary Concert by Defying Gravity which was equally memorable.

This year I had the pleasure of seeing two of the top ten shows with my parents – one was their Christmas gift; the other for Mum’s birthday. Glad I chose well! There was one musical that didn’t make the list but that’s because it’s still a first draft script. Yet Summer of Our Lives by Tyler Jacob Jones and Robert Woods promises to one day live up to their enormous talent in the comedy musical field. The reading/singing as part of Black Swan State Theatre Company's Emerging Writers Group was very good indeed.

But without further ado, here are the shows that did make the list…

Captain Frodo and the English Gents are the leaders of a super-hero ensemble that would whip The Avengers anytime, anywhere, in any Spiegeltent you care to name. With new acts added to the already impressive roster this is world class cabaret fare that returns as my number one show for the year.

“The show is perhaps at its best when it goes vertical - McCann's poledance routine is fast becoming legendary; aerialist Katharine Arnold was stunning on the rope in more ways than one; Bret Pfister is coolly efficient and precise on the suspended hoop; and the English Gents reign supreme, this time with a new tower of strength to accompany McCann.”

It’s unusual for a retrospective show to make it this high on an annual best of list. However, I did not laugh harder or for longer all year than I did during this generous two hour revue of the graduating musical theatre students’ time at WAAPA.

“It is the usual custom for the graduating students to 'take the piss' out of their major 2nd and 3rd year productions during Best Bits. But this cohort has many gifted comic performers and as a collective they have impeccable timing and mischievous sense of humour. The send-ups of Rent, Heathers, 42nd Street, and Chicago were exceptional…”

The aim of Western Sky Theatre to mount shows for performers with WA connections to return to Perth for is laudable. The fact that director Andrew Baker was able to wrangle a quality cast and crew to put on such an exceptional show in only three weeks is nothing short of a miracle. To do so in The Blue Room Theatre was another first. Quality all round.

“There is a truthfulness here that is commendable and while emotionally fraught, resonates with authenticity. There are no easy victories, no glib story beats. This heightens the joy we experience when these characters find even the smallest moment of happiness or deliver the briefest of smiles. The humour is distinctively Australian, at times laugh out loud hilarious, and a coping mechanism for the ever present harsh realities of country life.”

WAAPA’s mid-year musical at the Regal Theatre has become a must-see for musical theatre fans. The last two years have featured more contemporary productions catering to a younger audience. This year though WAAPA changed course and reverted to an old style classic and toes couldn’t have been tapping any faster with joy.

“There is perhaps nothing more exhilarating at the theatre than witnessing a mass tapdancing routine. I confess I'm sucker for it and here you don't get one, or two, or three, you get several tightly choreographed explosions of movement, colour and straight up, unabashed enthusiasm. It's a joy to watch.”

The Edith Spiegeltent. A legendary show that is the forebear of the modern musical. A vintage combination for any musical theatre performer. ‘Hold my beer’ as the meme says these days as the graduating acting students decided to muscle in on the MT’s turf like a gang of Macheath’s vagabonds. And the results were wonderful.

“Initially I had thought the prototypical musical was an odd choice for the acting cohort given the vocal demands, but it turns out be an inspired one. It suits the group personality of this graduating class like a 'fancy glove'. As one audience member put it after the show, "they owned the space".

6. Singin’ in the Rain – Crown Theatre

Speaking of legendary, the stage adaptation of the movie classic – I’m not going to say it, I’m definitely not going to say it made a spl-- was another old-fashioned style show that was aided immensely by the irrepressible performance of Jack Chambers as Cosmo Brown and the technical feat of staging the famous title number.

“Jack Chambers… stole the show in a brilliant comic performance as Cosmo Brown. It was a thrill to also see recent WAAPA graduate Lyndon Watts crush his feature number Beautiful Girl. The orchestra was exceptional.”

A glorious pisstake of the boyband phenomenon undertaken with great style and mischievous intent. The talent on display was top notch as a couple of straight forward covers amply demonstrated. It was the deliciously wicked original songs, however, that had the audience amped up for more in the intimate Ellington space.

“This is a high energy, full on parody, raunchy as all get out explosion of boy band harmonies, dance moves, and unforgettable lyrics. Trust me, there are lyrics you will never forget.”

Another stage adaptation, this time of a movie cult classic that is gloriously perverse in its own right. A high energy rock musical score along with several over-the-top characters and an explosive ending made this a fun first up outing in 2017 for the graduating class.

“It's dark subject matter but the surface level presentation is infectious rock music with subversive lyrics; a riot of colour in staging, lighting, costuming, and rear screen projections; and exuberant choreography befitting the age of its characters. It's a fun show with energy and black humour to burn.”

Bringing all the sass and sexiness, Koorliny started their year with a rollicking version of the Kander & Ebb classic. Opening out the wings and having the full orchestra along the back wall made this a visual and aural delight with a fabulous performance by Elethea Sartorelli as Velma.

“It's fair to say Kander & Ebb's classic is one of my favourite musicals - great songs, great music, sexy, slinky and sassy with that other musical theatre giant Bob Fosse adding his unmistakable stamp. It's a pleasure to report then that today's sold out matinee was a real treat and a fine start to Koorliny's community theatre season.”

The second years debuted in their first standalone musical with this quirky exploration of a notorious American president. Jackson, portrayed more as a rock star than a politician, was played with great swagger by Jarrod Griffiths in a full-on performance.

“The show started to click for me during the number Illness As Metaphor where Jackson (Jarrod Griffiths) and his soon to be wife Rachel (Stacey Thomsett) cut and bleed each other as a demonstration of their love. It's a metaphor, get it? From then on I settled into the, more often than not, outrageous retelling of Jackson's life and political career.”

Dunn showcased true triple threat talent as the lead in 42nd Street, singing, dancing, and acting her way to deserved accolades. It was a notably assured performance at a large venue that augurs well for her future. Not only that, Dunn was memorable in Heathers the Musical as Ms Fleming and one of the leading conspirators in the hilarity of Best Bits.

A tour de force comic performance in Singin’ in the Rain was eye catching to say the least. Exceptional physical comedy, timing, and sheer chutzpah made Chambers a clear crowd favourite and driving force of this stage adaptation of a legendary movie.

Ryan’s performance in Once We Lived Here grounded the whole production and, most impressively, she handled the emotional range required in the fractured timeline narrative expertly. It’s also a delight to hear Ryan sing after several non-musical roles this year.

The faux boyband made up of Chris Wilcox, Jason Arrow, Cameron Steens, and Ben Gillespie in their Perth iteration. All with incredible voices that led to the kind of harmonies you would expect… but not the lyrics you would normally sing along to! Great stage presence and knew how to work a crowd.

Set the tone for Chicago right from the get go with the cast and orchestra following her lead. Had several excellent set piece scenes and a highlight with fellow recent Finley Award winner Rachel Monamy in their duet of Class.

An energetic and feisty performance in Heathers the Musical where Warren sang superbly and looked fabulous in the colourful costuming as she played the role made famous by Winona Ryder in the movie.

Brought plenty of attitude and swagger to the role of Andrew Jackson and was hardly ever off stage in a full-throated performance. Sang the rock style numbers well and displayed good acting chops especially when the show took an infrequent serious interlude.

That’s it for another year. Thank you to everyone who made these and all the many other shows come to life. Have a great festive season and see you as a professional audience member next year!
Posted by Richard Hyde at 17:46