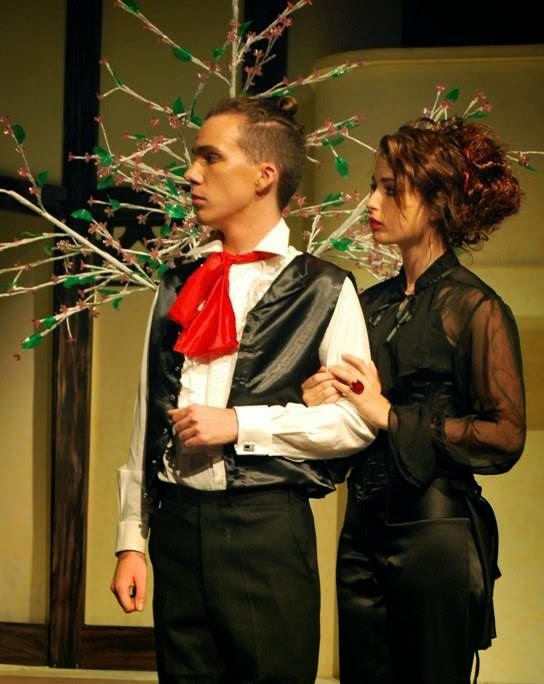 Ah, Shakespeare - generally acknowledged as the greatest writer in the history of Western Civilisation. Intimidating! Yes, I studied him at high school – Henry IV, Part 1 and Hamlet to be precise – but, and here’s the heresy, I generally find his plays a chore. Mine modern ears doth struggle to tune in to the language and odd rhythms and when it’s delivered at breakneck speed as it is so often these days, it leaves me cold.

What a delight then to have that fog lifted with Garrick Theatre’s production of this classic Shakespeare comedy. Talking to the director Peter Clark afterwards, the cast spent the first three weeks of rehearsal concentrating solely on understanding the language. This pays off in spades as I found it much easier to comprehend (and appreciate) the delivery than another version I saw a while ago.

Sure, it still took me a little while to get my ear in (not aided by the distraction of some idiot in the audience using a mobile phone during the early going) but from the moment Helena (Gemma Sharpe) makes her entrance everything snaps into place. Whereas before I was totally lost, this version all made sense. That clarity is great credit to the director and cast who obviously worked hard to make this a priority.

In the woods, the lovers and actors fall prey to the machinations between the King of the Fairies, Oberon (John Taylor) and his Queen, Titania (Jacqui Warner). Oberon is ably assisted in this by Puck (Krysia Wychecki) who causes all kinds of mischief while Titania has a retinue of fairies (Jayden Payne, Melissa Clements, Dailin Manning and Natasha Smith). The cast is rounded out by Michael Hart as Hermia’s father, Egeus and Natasha Smith also plays Philostrate, the Master of the Revels.

It is a simple set with a lighted tree the centrepiece. Camouflage netting is used across the stage to indicate the woods which also allows for interesting lighting effects as the fairies frolic behind it for example. The costuming is a mix of modern style suits for the men, bold patterns for the women and Wychecki’s Puck is a startling punk like figure.

A feature of the play is the physical nature of the performances. These are real slaps and blows being exchanged and the cast seem to revel in the high energy levels. The exchanges between Taylor and Wychecki, in particular, are almost brutal at times as Oberon battles with his unruly emissary.


Above all, this is downright funny in parts. The play within a play is hilarious and van Groningen has a ball as Bottom, ass and all. There’s a lot of physical comedy here and the Mechanicals play off each other nicely with pratfalls galore.

The cast are uniformly good with the work of a vibrant Wychecki and van Groningen the highlight. Tye is a boisterous Lysander and Sharpe very strong as the spurned then desired Helena. The fairies are all suitably playful and Payne reveals a lovely singing voice. Taylor has a commanding presence and Thomson is put through the ringer as Hermia’s fortunes wax and wane. As mentioned, all the Mechanicals play up to the over-the-top nature of Bottom’s antics and their own amusing parts in the sham play.

This is one of three plays being performed as part of the Shakespeare Anniversary Festival, the others being Othello and Macbeth. Three clubs have joined forces to celebrate the 450th anniversary of The Bard’s birth in this way – Garrick Theatre, Kalamunda Dramatic Society and the Darlington Theatre Players. If A Midsummer Night’s Dream is anything to go by, Shakespeare lovers are in for a real treat during the month of April.

***All three plays are being performed at the Marloo Theatre in Greenmount***
Posted by Richard Hyde at 16:32