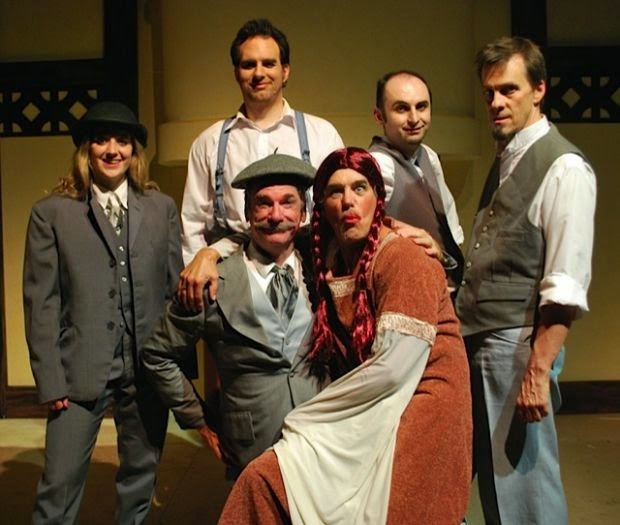 What a joy to discover that a travelling troupe of actors had descended on the Marloo Theatre in Greenmount to perform the tragedy Pyramus and Thisbe. And what a performance it was! I laughed, I cried, I oohed and aahed, I marvelled at the talent on display. Nick Bottom gives a compelling performance as Pyramus, a simple weaver who longs to be with Francis Flute’s comely Thisbe. Bottom commands the stage with a startlingly naturalistic performance – from whispered exhortations to his beloved to saliva driven tears of grief - he is truly magnificent. It’s difficult to believe Flute is in fact a man such is the skill with which he inhabits the passionate Thisbe.

The lovers agree to meet after some expertly executed wall talk but Thisbe is beset by the Lion and flees leaving a bloodied scarf at the scene. Pyramus arrives to discover said garment and, fearing the worse, takes his own life such is his devastation. In a heartbreaking moment, Thisbe returns to find Pyramus dead. She (eventually) prises the sword from her lover’s cold, lifeless hands and turns it on herself, the lovers reunited in morbid death.

I was on the edge of my seat. The deaths were vivid, the tragedy shocking. The physicality of the action was so authentic the audience winced at every blow, every thud, every sword thrust. The urgent messaging between Bottom and Flute through Wall’s chink was truly holesome glory. The only downside for me was the heckling of this magnificent group of actors by a bunch of royal prats on the fringe of the stage who clearly did not appreciate the skill and subtlety on display. In a word this was outstanding. No wonder Shakespeare ripped it off for his Romeo and Juliet.

Strangely though, there was also a prequel of sorts about how the troupe came to perform this short masterpiece. Something called A Midsummer Night’s Dream or some such nonsense…
Posted by Richard Hyde at 17:13