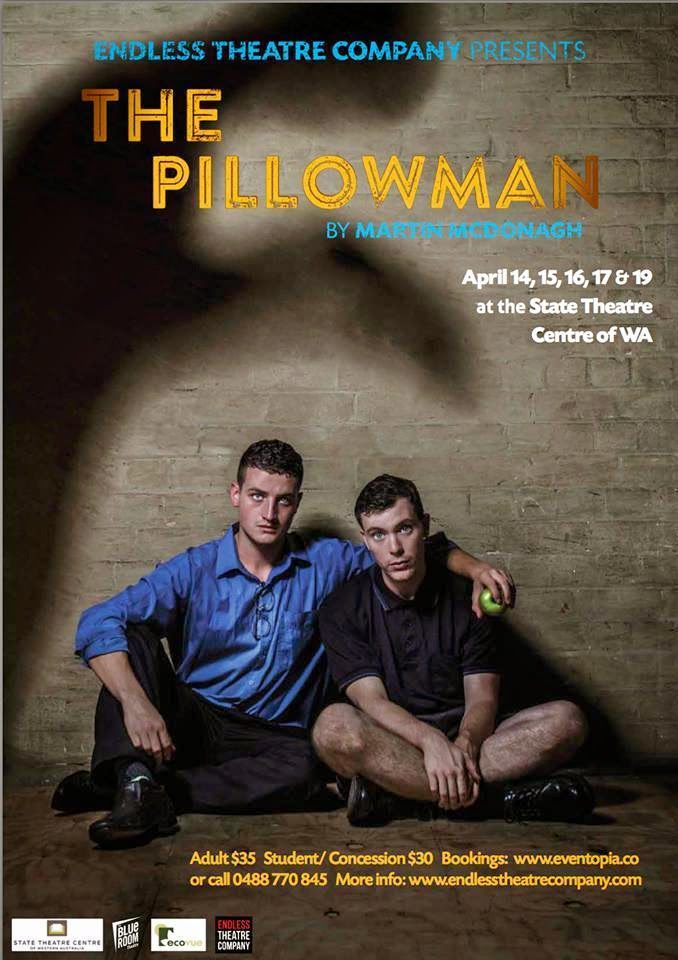 Black. Jet black. Black as in you go on a tour of a mine shaft a mile underground and they turn all the lights off BLACK.

Torture. Murder. Not just any murder mind you. The murder of children. In gruesome ways. In horrible ways.

Funny. Sorry? Yes, you read that right. Very funny. If you like your humour JET. FUCKING. BLACK.

But most of all, surprisingly, fabulously, a play about stories, about writing and what it means to be a writer. About taking responsibility for what is written. About where stories come from, even the dark ones – especially the dark ones. About legacy. For what is a writer without their stories?

A play that toys with language, that is full of sly writer jokes, that pokes fun at yet celebrates even the bleakest of tales; but a play that doesn’t shy away from, indeed embraces, the ramifications of what can be wrought when a story enters the world. When a tale enters the imagination of those whose responses are unpredictable. Heinous. Devastating. The culpability of the writer in this and the consequences they face. Be that of their own making or that of external forces represented here as the instruments of a totalitarian state.

As a writer I was gobsmacked. It was an astonishing, dark, twisted metaphor for the creative process. I loved every fucking minute of it.

This is exceptional writing by Martin McDonagh ("one of the most important living Irish playwrights") on every level. Deliciously pointed dialogue; stories within a story told with pride, with sadness, with horror, even with glee; and moments of tenderness and insight amongst the brutality and bluster. Revelations for every character; unexpected reversals; and a beautifully crafted first act climax that would happily cap off most plays. ‘Happily’ being a relative word here. It all ends with a bittersweet moment that is about as ‘lighthearted’ as this play gets but a moment that ties up the tale of the “Pillowman” to telling effect.

The story itself is deceptively simple:

A hooded writer sits in an interrogation room. A “bulldog policeman” and a detective question him and they’re none too subtle about it. The policeman uses brute physical force while the detective belittles and badgers with words. It seems the writer has written stories that bear remarkable resemblance to the murder of three children. In the next room is the writer’s retarded brother. They are both scheduled to be executed by the state. The writer’s stories are used as accusations against him. But will he give up everything to protect them, even his own life?

The performances are uniformly excellent. Jordan Gallagher does so much of the heavy lifting as the writer, Katurian. There is hardly a moment he isn’t on stage and his character swings from fear and disbelief to moments of defiance; to pride and self-loathing, to begging, even cajoling and then soothing his brother. He is also the chief ‘storyteller’ as he recounts his morbid stories and the tale of how they came to be written. It is physically demanding role and he pulls it off well. Anyone who doubts how physical should have seen the golf ball sized egg on his left elbow after the show, the result of being battered and clattered about in the more intense moments of interrogation.

Kiefer Moriarty-Short is the standout here as the brother, Michal – a tricky role that requires him to be childlike yet cunning and insolent as well. The work between Gallagher and Moriarty-Short in the long scene in the second half of the first act is superb as it swings and oscillates leading to a cracking conclusion. It is a master class in action changes, the scene spiralling off into new directions on the most casual of remarks.

Garreth Bradshaw’s Detective Tupolski deploys cold, smiling charm and sarcasm as he probes for the truth amongst the horror. He also has moments where barely contained rage explodes into life and has a showcase story of his own to tell, dodgy Chinese accent and all.

Bryn Coldrick’s policeman, Ariel, is all coiled anger and he is as likely to use his fists as he is the electrodes connected to a real life battery (that made the audience decidedly uneasy). Yet he also has brief moments of true compassion and understanding that reveal more complexity than we first perceive.

The staging is very simple which is appropriate as it is the writing and acting that are the stars here. There is interesting use of shadowed figures on the white backdrops during the telling of Katurian’s tales that added an unsettling effect as did the lighting and sparse music.

It was in fact quite an intimate location in one of the rehearsal rooms upstairs at the State Theatre seating about 80. A front row seat meant I was mere metres away from the action. The intensity was palpable. I must stress though that this is a darkly funny piece despite the lurid subject matter. Sure, it may not be everyone’s cup of tea as evidenced by one audience member who stood speechless afterwards as if in shock. But for me this is four actors revelling in world class writing and pulling off a stunning show with aplomb.

The aspects that resonated with me the most? As a writer what are you without your stories? What would you be prepared to do to save them? To make sure they carried on long after you are dead? There is also very much an exploration of what makes a writer write the way they do. Good and bad. Without those things could you still write?

Yes, I indeed loved every minute.

Written by Martin McDonagh, Directed by Rebecca Virginia Williams, and starring Jordan Gallagher, Kiefer Moriarty-Short, Bryn Coldrick & Garreth Bradshaw, there is only one more performance, Saturday 19th April, 8pm at the State Theatre Centre. I'd be there if you haven't seen it. Hood optional.
Posted by Richard Hyde at 16:35