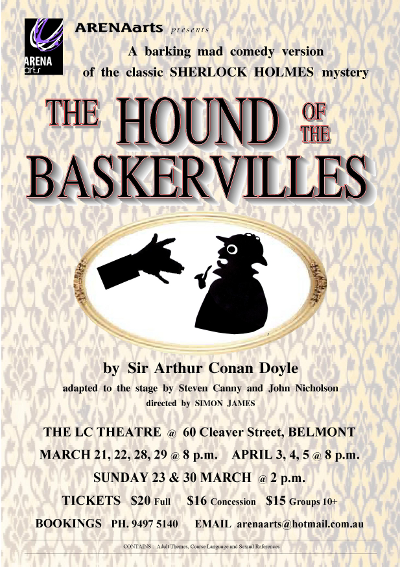 Ever popular, Sherlock Holmes seems to be everywhere lately – Guy Ritchie’s big screen adaptations, competing small screen versions on both sides of the Atlantic, and now he’s treading the boards in Belmont, played by actress Amanda Watson no less. Yes, The Hound of the Baskervilles has come to community theatre via ARENAarts and a “very silly adaptation”.

That may actually be an understatement. The script throws pretty much everything at the story of Henry Baskerville travelling to the moors of Dartmoor from Canada as the only living heir to the family fortune after the death of Sir Charles Baskerville under mysterious circumstances. There is physical comedy, skits, pranks, high farce, and constant asides to the audience; the actors breaking character to comment on events, deliberately missed cues, a marauding stage manager, groan inducing jokes, running gags, sight gags, and inspired mischief with props and sound. The comedy is of that particular English vein of pantomime meets Benny Hill meets Monty Python.

Does it all work? For me, no - the humour is very hit and miss at times but the writers of the adaptation, Steve Canny and John Nicholson, know this and pepper their version with self-aware commentary about the more suspect gags, the acting, the script, the crew and staging. So much is thrown at the wall, however, that plenty of it sticks and I was laughing throughout.

The story stays true to the spine of Arthur Conan Doyle’s classic with suitable exaggeration for comedic effect. I will admit it was all a little too scattergun for me during the first act but the second act starts with a bang and by the end I was sold on all the silliness.

This is in no small part to the work of the three actors - Amanda Watson, Bree Vreedenburg, and Rachael Maher - who were all excellent in a physically demanding production. Playing multiple characters with rapid scene and costume transitions with an array of sound cues meant that they were certainly kept on their toes.

Watson is very good as Holmes (I love the irony!), to such an extent that I missed this onstage persona in the second half of the first act as the story focusses on Doctor Watson and Henry Baskerville’s journey to Dartmoor. Here she plays an array of characters – Stapleton, Cecile, Barrymore and his wife, a weird yokel (with a very funny Godfather sight gag) and a hermit. Not to say she’s not good at these (she is) but I loved the confidence and drollness Watson exudes as Holmes.

Bree Vreedenburg in many ways grounds the whole production as she is allowed to play Watson throughout with only one other character change (another yokel). There is an earnestness and naivety here that is endearing amongst all the lunacy. Vreedenburg’s Watson also acts as de facto narrator and the butt of many of Holmes’ jibes (face palm).

Rachael Maher also has multiple characters – initially Sir Charles Baskerville, Doctor Mortimer, the cabbie and another yokel but it is in the main role of Sir Henry Baskerville that she really shines. Maher has a gift for physical comedy and was a delight as the sometimes preening, sometimes lovelorn, sometimes pant-less Henry.

They are given great support by Jane Sherwood as the Faceless Stage Manager who not only moves props around but audibly corrects the pronunciation of names and has her own moment of craziness as she provides the sound effects and movements that accompany the reprise of the first act.

This is where it all clicked into place for me – the second act starts with Amanda Watson (as Watson not Holmes… stay with me here) haranguing the audience and then demanding the first act be restaged to prove a point. This compressed retelling is hilarious and really propels the story to its climax as the dastardly fiend is uncovered and the hound slain.

The set is ingeniously designed to allow for swift scene transitions with a simple backdrop for the moor and a back wall that had panels that could be moved to represent Baker Street or Baskerville Manor. There was even a subtle sight gag when the moor backdrop was only partially raised - revealing two thirds of Baskerville Manor - where the two actors crouched to the adjusted level.

The sound effects were playful, being out of synch a lot of times with the actions on stage. The music was full of appropriately silly pop culture references from Stars Wars to Raiders of the Lost Ark to The Godfather.

But the stars here are Watson, Vreedenburg and Maher who give full tilt performances and embrace the overriding absurdity of it all with great energy and charm.

The Hound of the Baskervilles is directed by Simon James and is on at the Latvian Club in Belmont with shows Thursday through Saturday, 3-5 April at 8pm.
Posted by Richard Hyde at 16:29