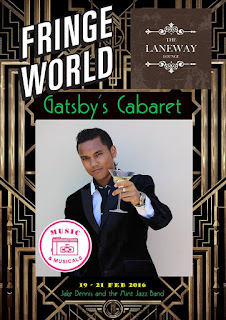 Ah, The Great Gatsby, an endless source of fascination for readers the world over and filmmakers who might one day do the Great American Novel justice. Here local singer Jake Dennis uses the tale as a framing device for a cabaret featuring the Mint Jazz Band, himself on vocals, and three actors who play Daisy, Tom, and a maid. Dennis portrays Jay Gatsby but reinvented as an African-American that adds another and nastier layer of conflict with Tom with whom he vies for Daisy’s affections.

This all gives structure to an eclectic selection of songs from the period as well as modern numbers a la Baz Luhrmann’s treatment of the material. Let’s be clear, Dennis can flat out sing with a voice as smooth as his appearance. He is charming and engaging, looks the part initially as Private Jay Gatsby in uniform about to leave for war; as the wealthy playboy; and finally as the lovelorn suitor. Yes, there are two short breaks in the almost two hour long show to allow for the costume changes.

Sjaan Lucas is also decked out in period appropriate costumes and made for a luminous Daisy in the somewhat under lit Laneway Lounge. I attended the show with another screenwriter and we were both impressed with her acting chops – she looked young, innocent and in love. Lucas was at her most vibrant when she kicked up her heels to one of the more upbeat numbers.

Samuel Barbas provided a brooding presence as Tom and had the unenviable task of delivering some of the more offensive lines including the N word and other racist epithets. I understood this within the context of the re-imagined Gatsby and the time period (1920s) but it is still shocking to hear for modern ears.

The band was in cracking form. A three piece outfit comprising drums, a double bass and keyboards that played beautifully and had a couple of occasions where they were allowed to jam briefly. They felt really attuned to Dennis and the sound balance was spot on even with a lot of background noise from the bar in the room behind us and from the audience itself with full table service on offer. An unavoidable state due to the venue but one that didn’t detract too much from the experience.

It’s the songs though that are the drawcard here and they are wonderfully rendered with Dennis and the band giving them skillful and exuberant respect. From bona fide classics such as Let’s Fall In Love to At Last; to modern songs that included Saving All My Love For You, Can’t Take My Eyes Off You, and The Winner Takes It All; a strong roster of numbers that all ended with Bye Bye Blackbird.

This was an enjoyable evening with Dennis clearly in his element as he played up to the crowd and urged them to join in with the more recognisable choruses. There were even prizes for the best dressed male and female audience member with the latter particularly happy as she danced her way up to the stage.

Gatsby’s Cabaret features Jake Dennis on vocals; the Mint Jazz Band of Mark Cunniffe, Chris Marquand, and Murrary Wilkins; with local actors Sjaan Lucas, Samuel Barbas, and Fleur Pereira. It is on at the Laneway Lounge just off Murray Street and there is only one more show, tonight the 21st at 7pm.
Posted by Richard Hyde at 12:09