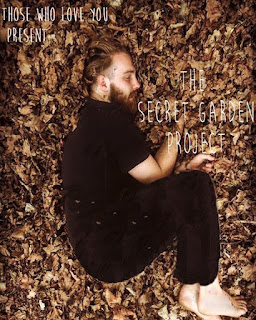 There was an interesting article on The Guardian theatre blog recently about how productions aren't always like a Rubik's Cube needing to be solved. In effect it's the experience and not necessarily the content that makes some shows work. You don't always have to "get it" to enjoy watching them.

This came to mind as I was sitting in someone's backyard in Leederville last night drinking homemade lemonade and eating a barbecued sausage, comfortably slumped into a chair. There was a nice breeze on a balmy Perth night; the sound of frogs and the chatter of other audience members; fairy lights and washing strung across the back lawn. I was relaxed and, to be honest, happy that this was going to be an easygoing experience away from the occasionally frantic nature of the main Fringe hubs. Yes, it's the fourth and final week and I'm starting to feel the fatigue. What a perfect tonic!

A guitarist (Tom Beech) strummed away adding to the rustic charm of a lovely old home decked out with a variety of comfy chairs and milk crates that happily accommodated a sold out show. I had received a warm welcome at the front of the premises and my ticket was exchanged for a friendship bracelet of string. It was a very long block so we wandered down the side of the house along a narrow path to be greeted by Greg (Nathan Whitebrook), the amiable gardener who was raking up the leaves to make things presentable for us.

Greg shook my hand and greeted everyone like they were a mate. He handed out two huge pitchers of lemonade and I ended up pouring drinks for people in my prime spot by a table of cups and napkins. Next it was two plates of perfectly cooked snags piled high. All the while he encouraged us to talk amongst ourselves and you could sense that the audience wasn't quite sure what was going on but it was all so damn pleasant.

Then we had two characters arrive. Look, I don't even know what they were really meant to represent. Zoe Street was crouched under a tree in which Monty Sallur was hidden throwing leaves and stuff at her. They pranced, they cavorted, they interacted. Sure, I could make some allusion to Adam and Eve; or maybe they were two kids mucking around in the neighbour's backyard; perhaps they represented nature itself. I could even draw a comparison to A Midsummer Night's Dream what with the fairy lights and a discussion about elves and fairies prompted by Greg.

It didn't really matter. Nor that where I was seated I couldn't always see what they were doing on the grass with 2-3 rows of people in front of me. Okay, and the fact that I had left my glasses in the car! I simply sat back and let the atmosphere soak in instead of worrying too much about what it all meant.

Whitebrook was an engaging host until things turn and the mood changes as his things are disturbed by 'intruders'. I won't spoil what happens next but the nice young man really doesn't like his things being touched. It was a well calibrated performance with a few surprises along the way.

It's an interesting premise for a show that has used three secret locations in places outside of any of the usual Fringe haunts. It's a little unusual and certainly not your standard text based production. Afterwards we were invited to take the short walk to the Oxford Hotel and have a drink and talk with the cast and other creatives. After a pint of cider and a good chat I took off for home feeling calm and happy which is a pretty good way to end the working week.

The Secret Garden Project is presented by a new theatre company comprising a cohort of Curtin University students and alumni called Those Who Love You. It is directed by Rhiannon Petersen with Deviser Kane Parker and featured Nathan Whitebrook, Zoe Street, Monty Sallur, and Tom Beech.

There is only one more show, tonight, the 20th, in Leederville. Go chill out under the stars and find out what a Jackalope is while you enjoy a sausage and homemade lemonade. If only there'd been a slice of Pavlova I would have been in Aussie backyard heaven!
Posted by Richard Hyde at 09:34