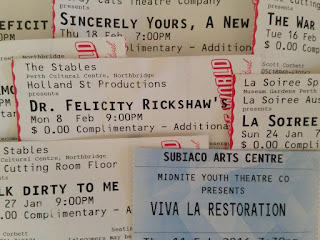 I do love a good list and while it is impossible for one reviewer to see anything but a fraction of the 700+ strong programme this is as good an excuse as any. I ended up seeing 32 Fringe shows – 27 that I was comp’d to review, 4 as a paying audience member, and 1 that was also an adjudication for the Finley Awards (and therefore can’t be considered here).

The overall standard was very high and there are a couple of shows that were desperately unlucky not to make the final list. I also had a shortlist of some 17 performers for 7 slots so that proved a difficult decision to whittle down as well.

My greatest impression from this year’s Fringe is the absolute value of storytelling skill. The ability to craft an engaging tale and execute it well is priceless. You know it when you see it; you feel its absence when it’s not quite there. This list is testament to that skill.

Here is my Top Ten:

1. La Soiree - La Soiree Australia
This was a true spectacle that combined world class entertainers with unbelievable feats of athleticism.

"I felt like a young boy again sitting in wide-eyed wonder as my brain tried to comprehend what my eyes were seeing. Thankfully my hands retained the ability to clap non-stop while the vocal chords hollered on their own accord. My grey matter lurched at the sheer improbability of feats I couldn’t even dream were humanly possible."

4. Bx - Becc Sanderson
Nostalgia may have led me to buy a ticket but the performance itself was testament to Sanderson's potent vocal ability 27 years on from those early days of The Sweet Blue Midnights.

"This is raunchy, laugh out loud funny, and performed with verve and chutzpah. There’s also a touch of pathos to ground the shenanigans but ultimately you’ll know in your heart that love truly is the driving force in the universe."

6. Impromptunes: The Completely Improvised Musical - Impromptunes
A riotous and impressive demonstration of an ensemble cast totally in tune with each other and the musical theatre form.

"One of the beauties of Impromptunes is that no two shows will ever be alike. It’s the genius of the premise that sees a completely self contained one hour musical performed every night. Not even the cast know what’s going to happen or even what the topic is going to be."

7. Tonsils + Tweezers - Black Swan State Theatre Company
The second play in the Loaded double bill, this showcased writer-director Will O'Mahony's adeptness with cracking dialogue and a few surprises along the way.

"O’Mahony’s dialogue is exceptional and he clearly has a love for language, words and wordplay. It all races towards a surprising conclusion that is cathartic for both the eponymous duo and, dare I say it, the audience."

"... this was a mature and accomplished piece of musical theatre with an excellent score and well delivered songs that had some great moments of genuinely affecting dramatic acting."

9. Viva La Restoration - The Midnite Youth Theatre Company
Another originally written musical that had been reworked from its 2013 debut at UWA. It is very heartening to see two locally originated musicals do so well at Fringe.

"Plaudits go to Messrs. Griggs, Owen and Silberstein on continuing to develop this 90 minute, one act musical. It’s a devilishly tricky form to get right and this is an enjoyable production that showcases great potential for future endeavours. A recommended addition to the local music theatre scene."

10. A Sting in the Tale - Richard McKenzie
A total sleeper that came out of nowhere for me. This was stitch inducing funny and McKenzie had such a naturally engaging ability as a spinner of hilarious yarns.

"All of these stories were told with such flair and great comic sensibility. There was a poignant moment at the end that circles back to his father that was touching and funny. This was an excellent way to end the night and the venue was perfect as an intimate setting for McKenzie to work in."

Male Performer of Fringe - Thaddeus Phillips
Excelled in all facets of a multi-layered one man show (17 Border Crossings) that was funny, engaging, thought provoking and showcased impressive stagecraft.

I had not come across Russotti before but her performance as the dowdy Amy and especially her alter-ego Dr. Felicity Rickshaw was a comic tour de force.

Becc Sanderson - if nothing else her Cry Me A River was one of the highlights of Fringe. Hopefully she'll be back in Perth soon.

Olivia Everett - has a real knack for playing comic tinged characters and in Viva La Restoration she shone as the lead.

Steve Turner - the local answer to Thaddeus Phillips with a wonderful showing in The Great Ridolphi that was beautifully nuanced.

Andre Drysdale - a complete revelation in Sincerely Yours with his acting ability matching his vocal talent to impressive effect.

So there it is. Another Fringe World for me done and dusted. Thank you to all the performers, publicists and producers who contacted me and provided tickets. Apologies to those I couldn't squeeze in. The earlier the notice the better!
Posted by Richard Hyde at 13:15