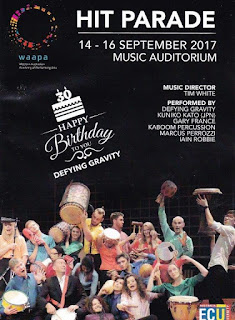 The last was mentioned by two of the students - Nanna Faulkner and Pavan Hari - at the post show interview held by the Friends of the Academy.

It's clear this is a tightknit group by the way they interacted on stage and even listening to some of the banter in the interval. That extended to returning graduates Joshua Webster & Catherine Betts (the duo that performs under the moniker Kaboom Percussion), Marcus Perrozzi, and Ian Robbie who were all given raucous acknowledgements.

Then there's Tim White, the Head of Percussion at WAAPA, who shares genuine enthusiasm and passion for the music and his students. Faulkner admitted she has called him 'dad' more than once and it's not difficult to see why as White exudes such a genial nature.

The joy was equally evident - the zeal with which students, alumni, and guests alike performed was writ large on their faces. The big grins, the concentration, the relief, the shouts and hollers.

And what joyous music it is - from full on aural assaults of massed drumming to melodic original compositions to delicate reinterpretations of Bach on the marimba, the diversity was astonishing. Inspiration was what I felt as a result. The talent, eye-hand coordination, the creativity and invention, the timing and synchronisation. Amazing.

Inspiration for all of us - students, staff, and audience - came by way of world renowned percussionist Kuniko Kato. She was clearly revered by the students after spending a fortnight giving master classes as part of the thirty year anniversary celebrations. The three pieces she performed - the multi-percussion Rebounds, the atmospheric Fratres inspired by the chanting of monks in ancient times, and the aforementioned Bach cello suites were mesmerising but all in completely different ways. The first was a robustly physical piece that became increasingly complex in its drumming patterns; Fratres was a multi-layered exercise in mood; and the combination of Bach and marimba demonstrated the sheer beauty of music.

The smile of relief from graduating student Laura Harris and reception from her fellow students as Harris completed the first piece of the afternoon in style. She also showed great composure during Fratres when it seemed there was a technical malfunction and she changed to another vibraphone with minimal disruption.

The flourish with which Tom Robertson finished the jaunty Log Cabin Blues on xylophone which he crushed in a dazzling display.

You will never see a bigger grin than Pavan Hari's as his world premiere composition Dark Lotus was met with rapturous applause. His piece not only incorporated vibraphone and other percussion instruments but also cello and violin. Not content with that, two dancers complemented the beauty of the music with the beauty of the human body in motion.

When you not only hear music but you feel it - the sheer waves of sonic vibration during another world premiere - alumnus Marcus Perrozzi's Momentum on taiko drums; and the massed drumming of the whole company led by another alumnus Iain Robbie celebrating the rhythms and traditional sounds of Papua New Guinea and the south-west Pacific. The frenetic attack of the latter was punctuated by a snapped drum stick sailing over Robbie's shoulder.

A captivating and inspirational couple of hours followed by birthday cake in the lobby (it was yummy too!). Happy 30th anniversary Defying Gravity.
Posted by Richard Hyde at 09:54