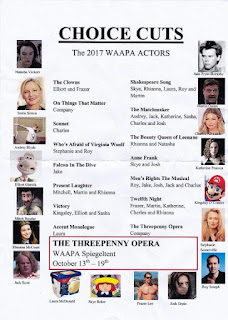 A greatest hits 2015-2017 megamix to help raise money for the upcoming showcases and to celebrate three years of studies coming to an end.

In that spirit of learning here's what I gleaned from this hour long revue...

In what surely will become the industry standard, Martin Quinn's pre-show announcement to the audience did more than merely remind me to check my landline, but filled me with confidence that in case of an emergency ECU's multitude of physicians would save me.

Quinn later explained, whilst disguised as a Noel Coward character, the latest state of the art theory in how to write a play. Apparently it involves a basket, a river, and a 7 day wait. Revolutionary.

Corpsing is a skill best taught in a safe, supportive environment such as The Roundhouse Theatre. Mitchell Bourke, Roy Joseph, and Katherine Pearson excelled under extreme provocation; baskets, hats, melodies and all.

Why hand someone a business card when you can surprise them with a hat instead as Jack Scott so ably demonstrated.

One cannot truly experience their first kiss without a little one hit wonder pop embellishment. Even if you're a doomed Jewish girl.

Stephen King has it all wrong. Clowns aren't scary at all. Unless you get dragged onstage pre-show and asked if you have a "tight 5 minutes".

The lyrics of Mack the Knife, suitably altered, prove a fitting send off for this graduating class. Until, you know, their last show in October, The Threepenny Opera.

This was a fun, breezy, hour long restrospective and the chemistry of this group is very strong. It's a really good graduating class.

It was also witnessed by, unless I'm mistaken, Perth girl Katherine Langford who might have ended up on this very stage if not for successfully auditioning for the show that has made her a star, 13 Reasons Why.
Posted by Richard Hyde at 23:08