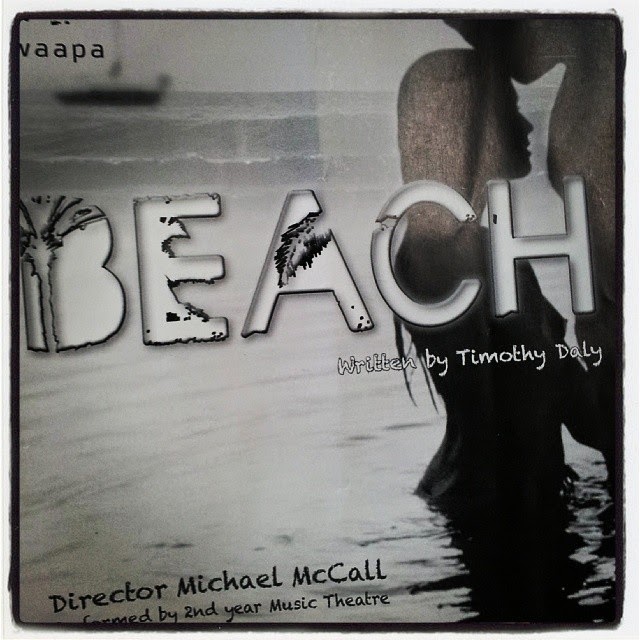 There is perhaps no more iconic an Australian image than a sun drenched beach at summertime. A place where Australians of all descriptions and backgrounds come to frolic, to play, to escape the unrelenting sun; sometimes to reflect, sometimes to dream of a better future.

Timothy Daly’s sprawling play examines the beach’s place in Australia’s national conscience from the time of the first white settlers until the present day. It is a presented as a series of vignettes - some that intertwine, most that explore an aspect of our heritage. It has a strong multi-cultural flavour and touches on political issues, notably the prejudice against those who come to our shores to share such blessings.

This version has been fortunately edited down from the original’s script of 300 pages and, I believe, 130 characters, to a more manageable running time. With a cast of 20 second year musical theatre students there is still room for some 80 characters. In other words it’s a big undertaking. The set is simple – a rostrum and a sand pit – with three separate entry points for the actors in the Enright Studio.

Talking to the director afterwards, this was the acting debut of many of the students in front of a paying audience. There is some singing – enough to be excited for future musical productions – but this is mainly a mix of comedy, drama, and skits. I’m not sure it entirely worked for me as a coherent play but it did showcase the talent of the second year musical theatre class. Everyone had an opportunity to shine and the production went without a hitch.

The first act ends on the impending doom of the 2004 tsunami which was a strong, emotional climax as multiple story strands came together in that moment. But also highlights the problematic nature of the piece which became more apparent in the much darker second act where I was unsure of the thematic relevance of several scenes. Allegations of rape, the continuation of a (deliberately) uncomfortable story strand that involved a young girl and an older ‘friendly’ man (the conclusion of which was subtly handled), a drug overdose, other revelations and reversals. There was even a moment where the drug victim is confronted by an early settler only to realise she is now a ghost. This was an interesting development but came late and was soon discarded.

Other strands were forgotten like the fate of Harold Holt – the second one that is, playing the part of the famously missing Prime Minister, who himself went missing. What these darker moments did do, however, was give the actors real drama to sink their teeth into and these scenes are well handled. If this is the acting debut of many in the cast then their efforts were all the more impressive.

A narrator is deployed but breaks the fourth wall soon after the buoyant opening sequence to directly welcome the audience to Beach but this seemed late and a technique sporadically and half-heartedly used - not by the performer I hasten to add but in the writing itself.

There is plenty of humour throughout, particularly the discovery of the joy of “picnics” by an otherwise chaste settler; and the fate of a screenwriter on location at the beach for the adaptation of his own novel was of personal amusement - “I am the creator of the piece”, he protests as he is escorted far, far away by security!

At its best Beach is a joyous celebration of a unique aspect of Australian life and is a most promising beginning to the year for this class of students. I very much look forward to seeing their future productions.