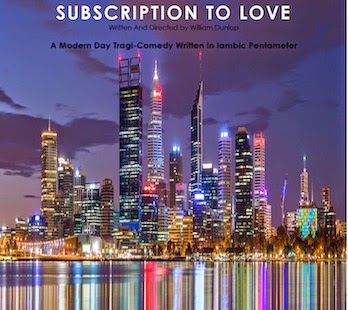 This is a new, locally written play by Will Dunlop that had a three night run at Playlovers in Floreat. I must apologise in advance as I saw the production on its last night and they had no programs left so I am unable to name the actors. The good news, as the gentlemen behind the bar informed me, is that they had not expected such a strong audience turnout over the run, hence the lack of programs. Indeed it was a full house for the last show.

At its heart Subscription to Love, as the title suggests, is a story about the romantic entanglements of two pairs of friends – Claire and Anna, Jamie and Elliott – who meet at a Sunday session. The girls flirt with the boys with Claire attracted to newly single Jamie while Anna talks with a struggling Elliott who is gay but determined to be the “wingman” for his friend who he is in love with.

Billed as a “modern day tragi-comedy” it’s curious then that it was written in iambic pentameter or, as one lady during intermission described to her friends, “they all talk like Yoda”. This, at times, sat uncomfortably with the actors, especially early where lines were often stumbled over. A few of the actors delivered the dialogue at breakneck speed so it also made it difficult to follow the flow. I had a sense that lines were being recited rather than a character being inhabited. That may have more to do with the wildly ambitious nature of the writing than the actors themselves. A lot of the play was also constructed as soliloquies which fits the language but not the modern day setting as much.

There were moments though where the choice of language worked nicely – Jamie’s jilted ex-lover Jessica imploring Claire to mention his name which she finally does after playfully avoiding the fact in rhyme. And the waiter at Claire and Jamie’s first ‘sober date’ intervening to ensure things go smoothly. There was some sly humour using the form though overt distortions of Shakespeare, particularly something as iconic as “To be or not to be” flirted with dilution by comparison.

A Shakespearean style narrator of sorts was also deployed – Harold the Hobo – who kicks the play off but then becomes a major player and is a catalyst for the tragedy that unfolds late. This was performed with theatrical flourish which tended to grate late in the play and also was at odds with more understated performances such as Jamie. I’m not entirely sure what a lot of his commentary contributed and this is a major issue I had with the play. Added to the story of the two friends was a raft of unrelated scenes where characters gave stand and deliver style dissertations on political issues - everything from the mining boom to asylum seekers to indigenous reconciliation to gay rights and even shark culling.

This was jarring to say the least regardless of what your politics may be (Abbott and Barnett come in for typical condemnation). One character, the barfly, was purely a device to facilitate these diatribes. The indigenous barmaid was her ‘wingman’ in this regard though she does have some involvement in the late second act complications. I had the distinct feeling that this was the writer talking directly at the audience. The problem with this is threefold – I don’t go to the theatre to be lectured at; it took up valuable time - this play ran about 2 hours 10 minutes on a slim premise as it was; it was very specific and localised (additions must have been made to the script within the last week or so to incorporate current hot topic issues) which will date the play.

There was even an early soliloquy by (the fit looking Jamie) about obesity which was reprised but left me confused as there was no hint of this in his opening scene where he seemed the more confident of the two friends.

His friend Elliot has the most interesting arc and is generally well played by the actor. He befriends Harold (though why we need a lecture on early Australian explorers was a mystery) who responds to his “benevolence”. Of all the intrusive political commentary, at least the question of gay rights has some relevance as Elliott struggles with his feelings for Jamie and the quest to find love.

Strange then for a play that bluntly trumpets a certain political viewpoint, that it is the gay man, Elliott, who is king hit coming to Harold’s aid (in response to a late, random act of thuggery) and subsequently dies. He was on his way to a date with Michael(?) the waiter having finally found the possibility of love. Claire and Jamie are seemingly reunited by this tragedy by the end of the play. This is after Jamie’s ex, Jessica, had accosted both Jamie and Claire declaring herself to be pregnant thus causing Claire to withdraw. Jessica later commits suicide by throwing herself under the train Jamie was on. We never see Jamie’s reaction to this, indeed all he appears to know is that the train has been annoyingly delayed.

In summary there is great ambition here but it is unfocussed. The play seems to begin as a possible Closer style relationship drama but then is diffused by unrelated political commentary. The running time is far too long and characters such as Anna disappear for an eternity only to be brought back as the late tragedy unfolds. I should have twigged early when Anna declared she was an emergency nurse. Harold has his moments but tends to overstay his welcome. Ultimately I don’t know what the play is saying about love – Elliott is ‘punished’ for finding love whereas Jamie seems ‘rewarded’ by ending up with Claire with no discernible effort. The plan that was hatched by Elliott and the barmaid to bring Jamie and Claire together comes to nought as the tragedy takes precedence.

It is here where I would concentrate – the spine of the story between the friends and their entanglements – and downplay the political discourse which, while passionate, distances and distracts.
Posted by Richard Hyde at 16:12