The Townspeople and the Plague - Murdoch Theatre Company (23 March 2014) 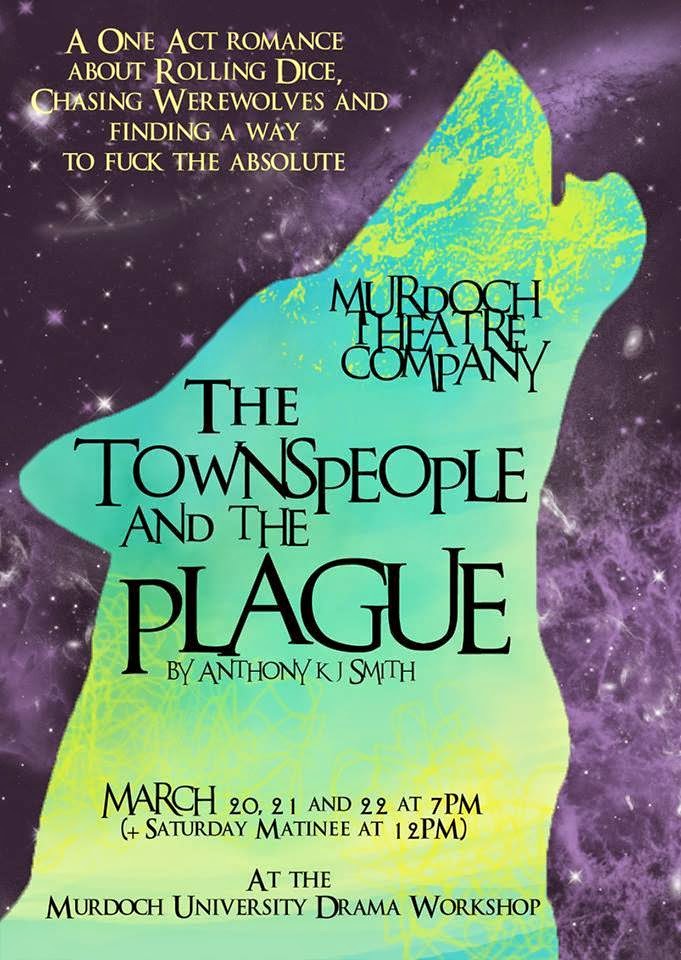 I arrived early at Murdoch University for the 12pm matinee because, having never been to the Drama Workshop before, I wanted to make sure I had time to find it on campus. Turns out this was pretty easy. However, this meant I was the first one there and was let in by the play’s director, Kate Willoughby. I had a good chat with Kate and members of front of house as they arrived – about the background of the Murdoch Theatre Company, the selection of the play, their theatre interests and ambitions, even a discussion about the WAAPA productions I’d seen during the week. It was a relaxing and interesting preface to the performance.

There were notes about the play from Kate and the writer, Anthony KJ Smith on a pin board along with a cast list (should have paid more attention Richard) and some photos. I hastily read the playwright’s notes where he himself admits this is a “wanky piece of theatre".

Okay, he’s not going to get an argument from me on that score. This has been deliberately written to be obtuse and to play with and subvert audience expectations. Overlapping dialogue, self-referential ‘stage directions’, asides about storytelling devices, nonsensical monologues, an inexplicable vaudeville number, a slither of plot, plenty of slapstick and even a minute’s silence for no apparent reason. Yet it all kind of works because the actors commendably commit to the material and largely play it straight. If this had too much “nudge, nudge, wink, wink” the show would have collapsed under the pretensions of the script.

Indeed, there is more than a healthy dose of Monty Python here – with the dramatic entrance of ‘The Fucking Plot’ (also known as Imogen) we get a monologue introducing a tale that could be straight out of a Python-esque universe. Edgar the Fourth, however, turns out not to be the protagonist of this tale. That falls to Proxy-shit who fights the good fight for someone or another against something or another with fabulous success and/or failure… I can’t recall. But that’s of little interest to the writer who also plays with faux philosophical discourse and musings. I mean, one of the characters is even a Viking, played with scene stealing intensity by Rhianna Hall. Oh, there’s even a werewolf… and a dance number… and very large genitals. Yes, it’s that kind of play.

The narrator, Sylvia, dispenses actual stage directions in a suitably droll fashion and we even have a little Avenue Q style hand puppet work going on. A stagehand occasionally features, interacting with the cast and determining the fate of the moon. Yes, it’s all very self-aware and clever but there are genuinely funny moments as well as the ‘what the hell am I witnessing’ excursions.

As a young woman behind me remarked to her friends after it had all finished, “I really liked it… I just don’t know why.” That actually sums up my feelings as well. This is absurdist and perhaps trying far too hard to be clever but it has a committed cast giving good performances with many funny and entertaining moments. Just don’t ask me what it all means. From the gist of the writer’s notes I don’t think he even knows and I suspect that’s the point!
Posted by Richard Hyde at 16:23