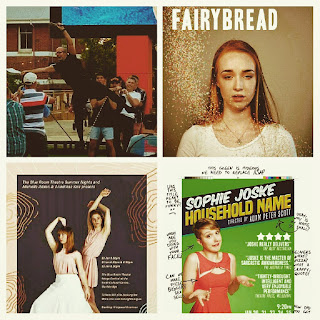 Topographs - The Blue Room Summer Nights, Michelle Aitken & Anneliese Kirk
Two pieces, one a philosophical musing on the concept of the rhizome; the other a more frenetic exploration of modern womanhood laced with pointed humour and attitude, told in three movements.
Studded with WAAPA talent the dancing is enthralling at such close quarters.
A fine way to kick off my Fringe festival.

A one act musical with a really strong set of songs/music with complementary singing talent that was very good. I wasn't as convinced about the Book though as I was a little confused with the blurring of what was real, what was imagined, and what was recreated.

Putting aside some opening night technical hiccups it's a good venue and the band played well. Each performer had a chance to shine with a featured song among the best of which were Parallel and I'm Just A Girl Tired of Waiting.

Confident, funny, and not above some bombastic lip sync style fireworks.

Hear the funniest theory about reincarnation ever.

Learn what a charity mugger is.

A fun show and a perfect way to cap off day one.

*originally published at facebook.com/perththeatrereviews
Posted by Richard Hyde at 20:26