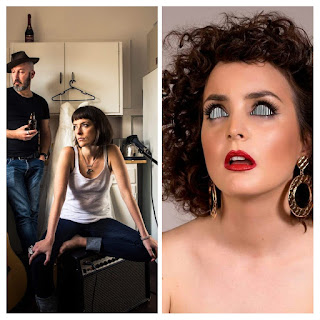 Satire pushed to absurdist limits as Groundhog Day meets the mother of all gauche dinner parties. While any production that features Jo Morris and Nick Maclaine amongst its acting numbers as well as the oft sharp writing of Jeffrey Jay Fowler will have its moments, this left me a little cold.

The targets of the pointed barb of Fowler's writing - materialism and the corrosive influence of wealth - were handled in heavy-handed fashion for mine and didn't offer more than surface level illumination. Rich people can be pricks. Really rich people even more so.

But beware large aquatic creatures tripping on your doorstep!

Two newly unencumbered people fall into each other before falling in love which leads to thoughts of marriage... which isn't as palatable to one as it is cherished by the other.

First rate performances by Georgia King and Mark Storen; the former in a layered portrayal that incorporated a level of warmth I hadn't seen from her before; the latter with an almost wide-eyed naivety that slowly turns into a hard-earned epiphany. There is an ease and believability to the characters' relationship that is compelling.

The script by Fowler is excellent. There was an 'outburst' relatively early when a specific viewpoint on marriage was explicitly stated. This momentarily made me nervous as I thought maybe the piece would turn didactic. But the excellence of the writing and acting in the set-up and characterisation had me invested in the relationship and genuinely liking each character. The perspective was handled with maturity and paid off in spades in a well executed ending.

The use of Storen's guitar playing, singing, and choice of song added immeasurably as well.

I know it's only the end of week one and there have been many well reviewed shows with no doubt many more to come but this has the Martin Sims Award written all over it. It is also a perfect companion piece for Fowler's terrific Fag/Stag.

*originally published at facebook.com/perththeatrereviews
Posted by Richard Hyde at 23:18