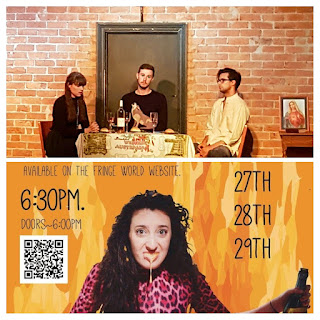 An empty waiting room outside the door to Hell. The receptionist is missing and Satan is apparently sooking behind the door. A queue of people wait to get in headed by newly deceased bus accident victim Emma in a 'sequined catsuit'.

We know it's purgatory as a) it's hot (special effects, Perth summer) and b) The Girl From Ipanema has been playing on an endless loop.

So begins a very funny one-sided conversation between Emma and Satan as she tries to gain entrance to this 'minimalist Hell'. Smart, likeable, and energetic, O'Sullivan is totally engaging as she plays up to the audience and creatively uses the door as both prop and defacto representation of Lucifer himself.

Just when I thought the premise was beginning to run out of steam, O'Sullivan pulls a reversal that is well-timed and cheekily executed as she sticks the landing with aplomb.

A fun show upstairs at The Brisbane that is destined to win Best Use of a Venn Diagram in a Fringe Show! Last show Sunday, 29 January.

Guess Who's Coming To Dinner - The Immaculate Conception (9 February 2017)

I can truly say that this show engendered an epiphany with its rousing anthemic closing number that has changed the way I see the world, today, tomorrow, and the day after next.

Words that will never leave me. I could share these talismanic lyrics of wisdom but such potent life-changing advice really should be experienced in person.

Of course, the journey to such wisdom is fraught with obstacles and what better way to depict the conflicts of the world than at the time honoured saga of introducing your gay Muslim boyfriend to your Carrie-esque religious mother over dinner? The premise is pregnant with satire and conflict.

What's more, the original songs show an inherent understanding of the musical theatre form driving the narrative forward and illuminating the inner emotional lives of the characters. The Book and Lyrics by Lucy Ross who plays the mother are witty and subversive; the music by Benjamin Colley playful and expertly rendered by Tim How.

Colley plays the son nervous about introducing Ashley Rousetty's Mo to his mother. As the increasingly inebriated Gloria becomes more offensive, Mo rises to the challenge. It's funny and pointed with a healthy dose of satirical bite.

Highlights include the aforementioned ending, a blazing rendition of Amazing Grace by Ross, and a standout setpiece as awkwardeness turns to disbelieving laughter which is cleverly incorporated into song. And sing all three can with talent to burn.

One more show left this Friday night. Go see it, it could change the way you see the world. Just don't sing the closing lyrics to your pastor.

*originally published at facebook.com/perththeatrereviews
Posted by Richard Hyde at 23:57