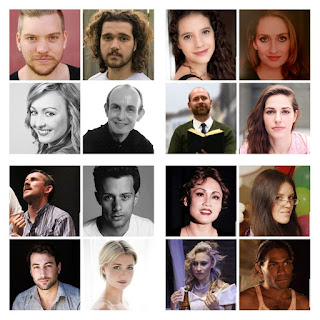 The level of talent never ceases to amaze me, both onstage and off. Seen everywhere from the cavernous performance space at the Heath Ledger Theatre to various black box theatres dotted throughout the city to hubs like The Blue Room and the ECU campus at Mount Lawley. Then there are the pop up venues come Fringe time and the beautiful, oftentimes heritage listed, community theatres in the suburbs.

Here are some of the most memorable performances I've seen since 2012:

"Declan Brown gives a wonderful performance as the utterly loathsome bully Bennett. He is a physical presence that intimidates all of the others but it’s his use of pointed sarcasm and humour that hits home early before he goes too far with his humiliation of Chadwick."

"Then there is seventeen year old Binetti who gives a spellbinding performance as William... For that transformation and its consequences to be handled so convincingly is a testament to Binetti’s skill."

"Brittany Morel is simply superb as Kate. The ferocity of Kate’s conviction that Larry is still alive results in a woman who is barely in control and Morel plays this with great skill... That this seemingly anguished and deluded woman turns into something far more potent in the third act is remarkable and Morel’s transformation is riveting..."

Prudence Daniel (Dot) - Sunday in the Park with George, WAAPA, 2018

Such an assured and confident performance. You simply couldn't take your eyes off Daniel as she handled the emotional and lyrical complexities of Dot with aplomb.

"Suzie Melloy gives a star making performance as the feisty Anita – she is simply superb and a real charismatic presence."

"Nothing is wasted or misplaced here. It is beautifully acted by Kingsley Judd... who clearly relish(es) working with such quality material."

"... anchored by a superb, multi-layered performance by David Gardette in the lead role. His Alfie is at turns conflicted, sweet, passionate, naïve, understanding, unbowed and such a warm presence throughout."

"With an expressiveness that belies her age, McCourt lets Irina’s emotion flicker across her face to stunning effect... Shock, horror, loathing, resignation, desperate attempts to convince herself of the possibility of happiness, an abject longing to travel to Moscow, the love for her sisters and fondness for Ivan... are all communicated throughout the play without a word."

"... brilliantly performed by Kieran Garvey... powerful, moving, insightful, occasionally funny and a blistering exploration of the devastation the Great War caused on those who survived No Man’s Land."

"His tone is conversational and... he demonstrated excellent comic timing and warmth in addressing and responding to the audience. It’s a nicely judged performance as Roussety imbues the character with enthusiasm, passion, some snark sure but also tinged with an underlying sadness or being ‘blue’ as Man in Chair would put it."

"Talking to (writer/director) Stephen Lee after the show, he reinforced what was apparent for all to see – sometimes an actor is simply perfect for a role. Rhoda Lopez gives a bravura performance as Edith Piaf."

"... but it’s Russotti who is the star here dropping in and out of the titular character with relish. Her lower lip trembles as Rickshaw mentally salivates over the steamy concoctions she conjures. It’s a tour de force comedy performance that never lets up..."

Giuseppe Rotondella (Eddie) - A View from the Bridge, WAAPA, 2016

"Rotondella as Eddie gives one of the finest performances I have seen at WAAPA in the last few years. There are so many layers revealed from the forthright, cocksure man’s man who is confident in his position and status to the slow unravelling of that certainty as Eddie’s pre-eminence is questioned by all around him."

"Felicity McKay is simply outstanding as Vanda. Her accent work is excellent and she slides in and out of various characters with astonishing ease, each one of them utterly distinctive so there is no prospect of confusion. She runs the gamut from playful, sexy, sensuous, commanding, dismissive, brash and refined but always with an underlying air of intrigue about who this person really is."

"The third year acting students crushed it out of the park led by Cameron Rouse who gave a stunning performance as Blanche DuBois. And I mean stunning."

"Ryan is superb as Jake – all coiled anger and aggression both physically and verbally. It’s an exhausting role and his physicality is outstanding – the fight sequences are well choreographed but it’s the manhandling of Gibson and Hampson that was achingly authentic and had the audience wincing."
Posted by Richard Hyde at 10:35