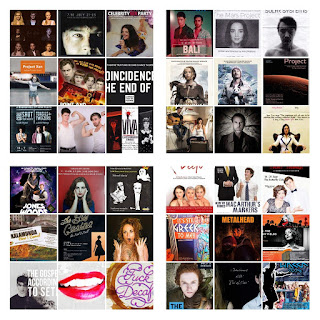 In the last of my retrospectives covering the years 2012 to 2018 I wanted to highlight those people perhaps closest to my creative heart, that being local playwrights and collaborators. The people who have created wonderful plays, musicals and cabaret acts that, at their very best, can compete with any new work anywhere else in the country.

There have been outstanding individual works - Stephen Lee's Madame Piaf immediately springs to mind - but this list is made up of those writers where I have seen more than one example of their creative output.

Thank you for the drama, the laughs, the entertainment, the discovery of new worlds and characters, of reflection and debate.

A duo that is synonymous with award winning one act comedy musicals. Jones is the showman with dazzling lyrics and inventive books that skewer everything from reality television to the movie industry to our obsession with celebrities. Woods is the more stoic of the two when it comes to being onstage but his music is just as inspired. Together they are a perfect creative match. They also have a shared love of movies and movie making that is abundantly clear in how they approach their material. It's perhaps why their work resonates so deeply with me. Above all, they create smart, witty, laugh out loud funny musicals that are a joy to watch. They are also prolific as a Holiday Special and recent Retrospective amply demonstrates.

Tyler Jacob Jones is a fine dramatist in his own right with F**k Decaf and Becky Peterson Will Punch You In The Face notable examples. He also contributed to the excellent Skin Deep which lambasted the cosmetic industry with typical flair.

Members of independent powerhouse The Last Great Hunt, Fowler and Isaacs combined their considerable writing talents to create two wonderful pieces of theatre featuring the same characters (that they also played) - FAG/STAG and Bali. There is a compelling honesty to their writing that comes from sharp observation and pointed social commentary. They can have an audience roaring with laughter in one moment then deathly silent the next. Consummate storytellers, they have an innate grasp of storytelling rhythms honed, I suspect, over many performances together.

Each has individually written notable plays with Isaacs' The Great Ridolphi an engrossing one man tour de force and Fowler impressing with perhaps his most mature work, The One.

McArdle was like a supernova at Murdoch University when I first came across him - from writing original works to acting, directing, lighting design, pretty much everything. Such indefatigable multi-tasking has continued since he graduated, adding publicist amongst other functions and being a popular fixture on the independent theatre scene. The scope and ambition of McArdle's writing has been a feature - contemplative dramas; a full superhero themed musical; bringing science fiction front and centre to the stage; and adapting Mary Shelley's Frankenstein as a passion project of considerable skill.

Highlights: Bye. Gone; Coincidences at the End of Time; Frankenstein; Between Solar Systems

Perhaps the finest local exponent of dialogue writing I have witnessed over the last seven years. I adore his rapid paced rat-tat-tat exchanges between characters and the density of the information he has them impart. He builds in verbal motifs and repetition that has my Aaron Sorkin loving heart swooning. There is a somewhat off-kilter approach to his storytelling that I enjoy as it allows for such theatrical treats as a talking panda. But he doesn't shy away from emotionally wrenching drama as the final moments of The Mars Project and his contribution to the Loaded double bill attest.

Always in demand as a dramaturg and mentor, Turner seems to have specialised of late in bringing true life stories to the stage. Notably in uniquely Australian tales set during World War I and a searing reportage-based production tackling rape culture. There is often a lyrical quality to Turner's writing that suits the historical dramas even with their sense of doom and glimpses of impending horror. Project Xan, however, grabbed you by the throat and demanded you bear witness.

The aspect I respect most about Barton's writing is the no holds barred, in your face approach. She illuminates extreme characters and behaviours with a forthrightness and honesty that you simply can't look away from. There is no guile or ego here. It may be blunt, it may shock, but it makes for riveting drama.

To say O'Neill is prolific would be an understatement. He seems to have at least two to three of his plays being performed every year and is a fixture in the community theatre scene. His comedies are so popular he has even turned two of them into franchises. But it's his dramas that most impress.

Highlights: Under Any Old Gum Tree; Holly & Ivy; It's All Greek To Me

Specialists in a certain type of cabaret show - take a musical theatre icon from the past and weave a tale about their life story while incorporating their most memorable songs. It's a winning formula that has seen entertaining explorations of Cole Porter and, I confess, someone I did not know much about beforehand, Dorothy Fields.

Highlights: You've Got That Thing!; Exactly Like You: The Magic of Dorothy Fields

Emerging from the UWA theatre scene this trio has been tackling that most difficult of beasts, the fully fledged musical with Owen and Silberstein on book and lyrics; Griggs composing the music. The first effort I saw was promising though perhaps trying a little too hard to impress while the followup was one of my favourites from 2016's Fringe World.

Another member of The Last Great Hunt, Bezard's writing has a lighter comic touch, oftentimes playing with farce and the exaggerations/preoccupations of youth. Even her most provocative play featured four female teenagers that are literally in a playpen.

Highlights: In A Bony Embrace; Girl Shut Your Mouth; The Talk
Posted by Richard Hyde at 18:29