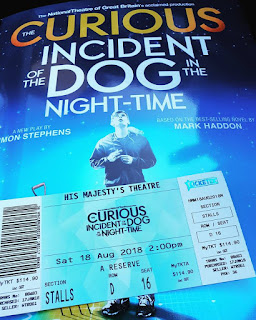 Another Christmas is over and as the food coma slowly subsides it's time to cast one's mind back over the theatre landscape of 2018. I suspect I may have a somewhat more eclectic viewing pattern than many of the people who do such lists. Nor can I compete with those entities that have multiple reviewers whose coverage is therefore substantially larger. However, I did see some 70 productions during the year of which 38 were classed as plays.

The main takeaway is that there is good work being done year round in Perth. Not only in major hubs such as the theatres in the Perth Cultural Centre and at WAAPA but in the suburbs with vibrant community and independent theatre.

Fringe World offers a smorgasbord or productions every year though it will be interesting to see if its growth spurt can be sustained. There are sizeable rumblings of discontent from local artists about being cut out of a fair share of the pie. Time will tell if that situation will be remedied so that the people bringing in the punters, quite rightly, get a more equitable share of the profits for their creative labour.

Here now, my Top Ten plays that I saw during the year...

1. The Curious Incident of the Dog in the Night-Time - The National Theatre of Great Britain

Nothing short of dazzling in its execution, this was world class theatre staged in the beautiful His Majesty's Theatre.

"The stagecraft on display is world class in all facets - set design, lighting design, sound design, movement and acting all working seamlessly. The play is moving, funny, thought provoking in an excellent script by Simon Stephens... a revelation. When a play is firing on all cylinders like this it is an utter joy to witness."

The Academy went all in on classics this year, mounting productions from revered playwrights such as Arthur Miller, Oscar Wilde, Anton Chekhov, as well as The Bard. None was more vividly brought to life, however, than this Tennessee Williams classic.

"Tonight's production of A Streetcar Named Desire answered this fundamental question: Why do I go to the theatre? Answer: It's one of the few places I know where magic happens. Honest to goodness actual magic... The third year acting students crushed it out of the park led by Cameron Rouse who gave a stunning performance as Blanche DuBois."

One of the advantages WAAPA has is that it can cast 18 actors in its productions, something that is prohibitive cost-wise in professional theatre and strains available talent in community or independent theatre. The full effect of being able to deploy the full cohort was never more evident than in this damning indictment of the lead up to the Iraq War.

"Anger. Unbridled, fist clenching anger. Usually not a good emotion to have walking out of a play. In this case it was justified, well earned, and the exact state to be in... Excellent, urgent, relevant theatre to get angry about."

The Aboriginal Performance students continue to mount excellent end of year productions. An achievement made all the more laudable by the fact that it is only a one year course. Fever follows in the footsteps of Rodeo Moon and last year's Windmill Baby as vibrant showcases of the outcome of that intensive yearlong training.

"Fever... is the most ambitious production I've seen out of this performing strand at WAAPA - two hours and twenty minutes in length with intertwined stories written by four acclaimed Australian playwrights that is densely packed and often elusive. It's a testament to course coordinator Rick Brayford's and visiting director Rachael Maza's work with these talented indigenous performers that they pulled off such a complicated work in quite stunning fashion."

One of the premiere community theatre clubs in the state, Koorliny is perhaps best known for its musicals. That DNA does pulse through this tragic recounting of the last days of the legendary Judy Garland's life with many of her most famous songs featured. But it's the acting of all three leads that made this so compelling.

"The three actors were terrific in what, ultimately, is a tragedy as the tears of a few audience members demonstrated at the end. But what a rollercoaster ride to get to the final song; one that was preordained almost 80 years ago."

The 2nd year musical theatre students are always plunged into a non-musical production for their first public performance. WAAPA takes the third aspect of 'triple threat' seriously as acting chops are tested early. Simply put, this is the best introduction to a MT cohort I've seen in the last 5 years. There was a sense of playfulness that was infectious.

A passionate condemnation of toxic masculinity using comments and testimony from actual one punch cases combined with a boisterous physicality set in a boxing ring. Impressively, this was performed by young men speaking directly to their generation. Powerful.

Another introduction, this time to the 2nd year acting cohort tackling a classic in the early going of the year. Staged in the black box space of the Enright Studio I found this suitably entertaining and a promising beginning for this group.

A two-hander with puppets and live musical accompaniment that was touching, funny, and quirky. A gem of this year's Fringe World.

Speaking of classics, this comic tale of feminine empowerment in a time of war written over two millennia ago was updated to incorporate the #metoo movement to pointed satirical effect.

"Excellent use of props (to hilarious effect in one memorable sequence) and costuming. Well acted, inventively staged, and as relevant now as it was over two millennia ago. Perhaps even more so. A breezy hour of theatre."

The now graduated WAAPA student took on one of the iconic roles in theatre, that of Blanche DuBois, and simply blew the walls off the Roundhouse Theatre. The audience I saw the play with were mesmerised and happily discussing Rouse's performance afterwards. I was quite amped by what I had seen. The skill involved was outstanding, from the authentic southern accent to the slow unravelling into nervous breakdown. A magical performance in a terrific production.

In the exceptional piece of theatre that was The Curious Incident of the Dog in the Night-Time, Joshua Jenkins gave an astonishing lead performance as Christopher Boone. Playing a character somewhere on the autism spectrum, he was always in the moment and truthful, whilst also navigating the physical demands of a production that had so much technical wizardry and precise movement. You could not take your eyes off him in an emotionally resonant performance.

So convincing as George W. Bush in Stuff Happens that I was infuriated by the "aw shucks" charm that led to the disaster that was the Iraq War.

Pitman had an excellent year with notable highlights being her light touch as Cecily Cardew in The Importance of Being Earnest; a very funny take on Romeo & Juliet that saw her adjudged co-winner of the annual Shakespeare Awards; and a fiery turn as Helena in A Midsummer Night's Dream.

Stood out in Thought Jar Productions final episode of the live science fiction radio play Atlantis. Mulvany showed great emotional range as her character was forced to recall memories past, present, and future in a riff on Dickens' classic A Christmas Carol.

A bravura performance as a caustic and profoundly wounded Judy Garland in the latter stages of her life in End of the Rainbow. Monamy has never been better, showcasing a range of emotions as Garland attempts yet another comeback to pay off years of debt due to drug and alcohol abuse. The acting is superb and... her vocal performance of many famous numbers is icing on the cake.

Excelled as Stanley Kowalski in A Streetcar Named Desire bringing a physicality and brutishness that belies his age. One to watch as he moves from student into the professional realm. Immensely talented yet down to earth and humble.
Posted by Richard Hyde at 13:53